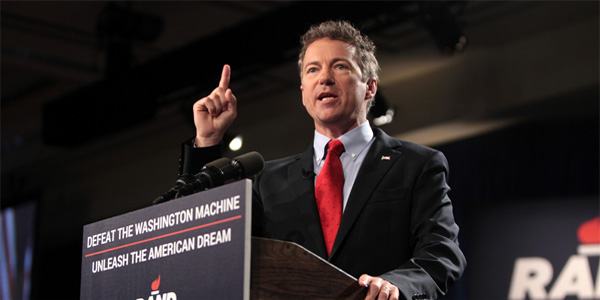 Sen. Rand Paul, R-Ky., warned Thursday night that some of his Republican colleagues might vote to allow only witnesses called by Democrats during the impeachment trial.

The senator wants to hear from the whistleblower who filed the complaint that led to impeachment as well as Joe and Hunter Biden.

"I'll tell you what my fear is, some Republicans are going to vote for witnesses, and we'll get those — the ones that Democrats want. Then when we have the votes on bringing witnesses, or letting the president choose his witnesses — I think those will fail," he told Fox News' Sean Hannity.

"Not only because of those Republicans, but because a whole variety of Republicans may not allow the whistleblower, may not allow Biden for one reason or another, because they served with him," Paul said.

The younger Biden was paid $83,000 a month by a corrupt Ukrainian natural gas company while his father, Joe Biden, was Obama's point man for Ukraine policy.

The deal, he told Hannity, "smells to high heaven, smells like corruption."

Paul warned that if Republicans allow only Democratic witnesses, the GOP base will "punish those people who set up that kind of scenario."

"If it looks like a kangaroo court, the Republican base is going to be very, very unhappy," Paul said.

He noted Schiff has a staff member who is a friend of the whistleblower, potentially making the House Intelligence Committee chairman a material witness.

After initial denial, Schiff admitted his staff had contact with the whistleblower before the complaint was filed.

"There's a lot of people who are quiet, so I've been kind of loud," Paul said. "My goal in this is to be done with the impeachment as soon as possible."

'This is a big deal'

Senate Majority Leader Mitch McConnell has said that each witness must be approved by a majority of 51 senators.

Republicans have a 53-seat majority in the Senate, but already members such as Sens. Susan Collins of Maine and Mitt Romney of Utah have indicated they want to hear from witnesses.

Paul fears witnesses such as Hunter Biden, Joe Biden and the whistleblower may not pass a majority vote.

He told the Gateway Pundit that if witnesses are decided in this way, the Senate will end up with the kind of anti-Trump list heard in the House.

"This is a big deal – I don't usually lecture my colleagues – but they need to understand that they cannot win an election if they become estranged from the Trump base or Republican base of the party," Paul said.

Meanwhile, a new poll shows Romney lost support from Republicans and independents in his home state during the weeks after he called for witnesses.