There exists a remote country so exotic, so distant, so unknown and so mysterious that Washington politicians almost need a machete and a pith helmet when they visit on fact-finding missions.

I refer to America's heartland.

I mean it. A recent headline read as follows: "Jobs, Family, Future: Gov. Kristi Noem Shares What's on the Mind of America's Heartland" – as though the heartland were a distant foreign country where urban anthropologists go to learn more about a primitive culture. (To be fair to Gov. Noem, she's the governor of South Dakota, so presumably this observation doesn't include her. In other words, she governs the primitive culture known as South Dakota.)

As someone who has resided in the distant outpost of Flyover Country for nearly 30 years, I'm here to reveal a startling fact: There are dozens of states and hundreds of millions of people who live in this foreign nation. And – another startling reveal – we vote. Shocking, I know.

My favorite example is when Hillary Clinton made a campaign stop at an upstate New York 4-H club. A Secret Service agent reported that when Hillary saw farmers and cows, "She turned to a staffer and said, 'What the f - - - did we come here for? There's no money here.'"

In another comical example, "Ned Resinkoff, a senior editor for the progressive ThinkProgress, wrote in detail about how horrified he was that his plumber, 'a middle-aged white guy with a southern accent,' may have voted for Donald Trump. The idea that his plumber may have different political beliefs left Resnikoff so rattled he 'couldn't shake the sense of potential danger.'" (Danger? Is your plumber planning to attack you?)

In the superb book "Militant Normals " (highly recommended), author Kurt Schlichter documents over and over again the divide among groups he terms "Elites" (the "experts" and their supporters who run government, media, academia and Hollywood), members of "Conservative Inc." (the GOP establishment who speak the words regular Americans want to hear, but never ever ever act on their promises), and "Normals" (regular hardworking Americans struggling to regain their country; the natives of Flyover Country).

"Today's Elite hates the Normals – hates them – and it acts accordingly," writes Schlichter. "Except the Normals have noticed. And they are starting to hate the Elite right back." [Emphasis in original.]

The GOP is no better. "Every election year, the politicians of Conservative Inc., are out there conservativing it up for the Normals, and every off year they go back to Washington and do just the opposite," says Schlichter.

This author also identifies the reason behind the hysterical loathing toward Trump by the Elites and their minions: They are afraid of him. Trump represents something the Elites and Conservative Inc. have spent the last hundred years fighting: The return of power to the Normals, as our Founding Fathers intended. As the meme about Trump says, "In reality, they're not after me. They're after you. I'm just in the way." 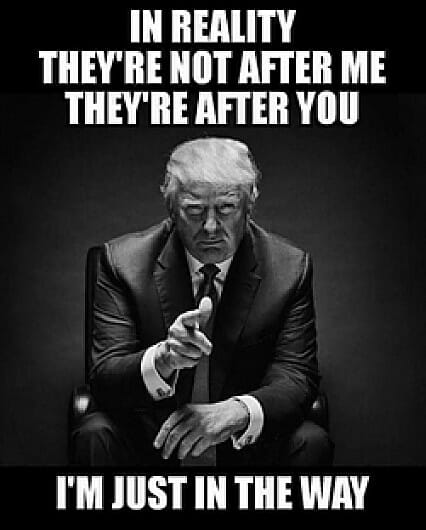 "So it came to pass that by the 2016 campaign, both major parties were heading toward Election Day utterly oblivious to the fact that the Normals were seething," writes Schlichter. "And the consequence of that oversight changed American history."

"The modern Elite needs and wants an enemy," reports Schlichter, "and the Normals make for a great villain." They also derive great joy in forcing others to bend to their will.

So when Trump came along and actually had the nerve to fight for the interests of the Normals rather than the Elites, the battle lines were drawn.

However, determined not to repeat the same mistake in the 2020 election, daredevil Elites sometimes venture into hostile territory on taxpayer-funded fact-finding missions and talk to a few farmers, mechanics, housewives, truck drivers or other exotic denizens. They ask what the Normals are concerned about. And when the Normals reply along the lines of steady jobs, family values, border security and crime, the Elites shake their heads, baffled, and say, "Don't be silly. What you're REALLY concerned about is transgender access to bathrooms, climate change and impeachment, right?"

And then the Elites return to their ivory towers and confidently report to their echo chambers that America's heartland is concerned with transgender access to bathrooms, climate change and impeachment.

So the Elites and Conservative Inc. still don't get it. They don't get how sick the Normals are of their shenanigans. "They were tired of having their morals and values rejected, spit upon, rolled up tight, lit on fire, and shoved up their [rear ends] by an Elite that thought morality was a joke and decency a weakness," Schlichter sums up.

Apparently, it hasn't occurred to the Elites and the Conservative Inc. politicians to stop treating Normals like something they should scrape off their shoes. Instead, they lurch further and further into extremism and think the Normals are happy to be dragged along.

And so it continues. To all the natives out there in Flyover Country, remember who has your back in the 2020 election.

Patrice Lewis
Patrice Lewis is a freelance writer whose latest book is "The Simplicity Primer: 365 Ideas for Making Life more Livable." She is co-founder (with her husband) of a home woodcraft business. The Lewises live on 20 acres in north Idaho with their two homeschooled children, assorted livestock, and a shop that overflows into the house with depressing regularity. Visit her blog at www.rural-revolution.com.
Campaign rally crowds: Yes, size matters
Trump's most significant legacy
To those slimeball women who celebrate their abortions
Do we have a gun problem, or a government problem?
The remote country no politician has ever heard of
See more...