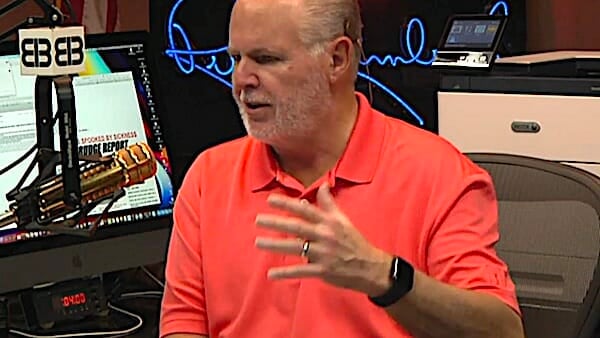 No one should have been surprised by the "bombshell" New York Times report based on anonymous sources of John Bolton's claim in a coming book, because it "follows an old playbook," talk-radio host Rush Limbaugh told his listeners Monday.

The Times report claimed Bolton asserts President Trump linked delivery of aid to Ukraine to an announcement about an investigation of Joe Biden and his son, Hunter.

Hunter Biden received $83,000 a month to be on the board of a corrupt Ukrainian natural gas company, Burisma, while his father's vice presidential portfolio included reform of Ukraine's energy industry. And Joe Biden is on video boasting that he threatened Ukraine with the loss of $1 billion in American aid if the president didn't fire a prosecutor investigating Burisma.

Rush Limbaugh said: "Notice the timing of this leak. This book has been in the vetting process for two to three weeks now — and, by the way, do you know who's vetting it at the National Security Council?

Alexander Vindman is one of the Democrats' impeachment witnesses who objected to President Trump's Ukraine policy.

Continued Limbaugh: "Isn’t it just magical that on the very day after the Trump defense team decimates the House managers' [impeachment] case, the very next day here comes this leak from the New York Times about what Trump told Bolton supposedly that he didn’t want to do? What remains amazing is the leak supposedly is that Trump told Bolton that he didn’t want to release any aid to Ukraine until Ukraine turned over him material related to investigations.

"So Trump supposedly tells Bolton that he doesn’t want to release aid. But he did. The aid got released. It was more than Ukraine thought they were gonna get, and it included Javelin missiles, and Trump got nothing for it. There was no investigation! So we’ve got Bolton here saying that Trump supposedly… The leak is Bolton['s] book says Trump told him that he didn’t want to release aid. The leak cannot be that Trump didn’t release aid because the aid was released!"

Limbaugh said the Democrats "making this case have always tried to make criminal what they claim were Trump’s desires or Trump’s thoughts or what he really intended or hoped to do."

"And they have ignored the fact that all of these supposed criminal thoughts that Trump had never prevailed. Ukraine got their aid."

He noted Sen. Ted Cruz, R-Texas, said in a podcast: "You know, I think these House managers ought to stop focusing on a simple acquittal and they need to make tracks and they need to go at this on the offense, and thing that the Trump defense team needs to do is make it plain. Establish that it is perfectly legal for a president of the United States to investigate corruption in a foreign country that involves American citizens."

Limbaugh commented, "And I agree with Cruz."

He explained that similar "surprises" were sprung by the left in opposition to the appointment of Brett Kavanaugh to the Supreme Court and others.

He pointed out another problem.

"We're relying on the New York Times for accuracy when they have no claim to that anymore."