One of its objectives is "to finance and create a new department at the Connecticut State Police which will specialize in investigating far right extremist groups and individuals."

There's no mention of other political opinions, nor of the violence routinely triggered by antifa leftists across the country.

The Gateway Pundit noted Looney said it's "unfortunate" that "hateful beliefs" are protected by the First Amendment."

"Unfortunately, people who entertain hateful beliefs ... are protected as long as [their beliefs] don't result in hate-crime actions," Looney asserted to reporters, the Hartford Courant reported. "We want to be more aggressive in enforcing our laws and identifying like sources of potential domestic terrorism acts against religious institutions and ethnic institutions."

The Democrats said the new state department is needed to target "the right" because of "extremism."

They believe the federal government is "unwilling to protect different communities of Connecticut" so "the state should fund a new department at the Connecticut State Police which will specialize in investigating far right extremist groups and individuals."

The Connecticut Democrats' agenda also includes required indoctrination for judges. It would "create a Benchbook for judges, and require proper training based on the Benchbook" and various "expansions" of voting rights.

The Gateway Pundit report noted the plan has no mention of antifa or the radical left.

Noah Rothman wrote in column for Commentary magazine last July a "contradictory notion has taken hold" on the left that "the right is responsible for the rising tide of political violence in America."

"At the same time, however, those who engage in violence in defense of the left’s program are often lauded for their refusal to adhere to outdated and insufficient norms of civil conduct," he wrote. 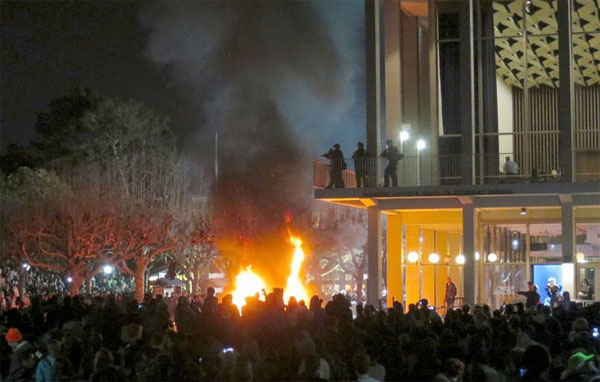 "Since the 1980s, 'the extreme right has held a near-monopoly on political violence,' wrote the Nation's Joshua Holland in 2017. A 'decades-long drop-off in violence by left-wing groups,' coincided with a shocking rise in murderous violence by 'right-wing extremists,' read a 2018 report from the Anti-Defamation League's Center on Extremism. The idea of the 'violent left' is even a 'myth,' the Southern Poverty Law Center averred just last week, designed to radicalize the right to preemptively attack its political adversaries.

"But when mythological left-wing violence becomes impossible to ignore, it is often excused or even lionized—sometimes in the very venues in which its existence is dismissed.

"Dartmouth College lecturer and 'historian of human rights,' Mark Bray, has refashioned himself as America’s foremost antifa apologist. In his book and in places like the Washington Post, he's argued that “physical violence against white supremacists is both ethically justifiable and strategically effective.' The Nation's Natasha Lennard has similarly praised this organization's 'militant left-wing and anarchist politics,' and mocked its critics as 'civility-fetishizing' liberals who 'cling to institutions.' Nor is Antifa alone in this campaign. A Mother Jones profile of the many left-of-center grassroots groups whose resistance 'sometimes goes beyond nonviolent protest—including picking up arms' is anything but condemnatory."