As we enter the New Year, most of us are hopeful our lives will improve. But for a huge segment of society, things are unlikely to get better in 2020. I refer to those burdened by student loan debt.

I stumbled upon a horrifying piece entitled "30 Americans Share Their Student Loan Debts and You Can Feel How Hopeless These People Are." These short little blips illustrate the despondent fate of so many tottering under the crushing remnant of their higher education. Reading just a few of these examples is enough to make you weep:

Many of us are asking how this is even possible. What kind of payment plan requires people to pay exorbitant amounts for years, yet still owe more than they started with?

Recently, I stumbled across another article – this one written by a mom in the liberal rag Slate. Provocatively called "I Killed My Teenager's Fancy College Dreams. You Should, Too," it outlined how a mother of uncommon common sense told her artistically talented daughter "No" when it came to paying upwards of $75,000 per year to attend an elite art school.

The parents of this teen blasted the girl's high school guidance counselor who filled the talented student's head with a rosy future in art school and promised her the moon – but he's not the one who would have to deal with the resulting debt. As frustrated as the daughter was about not attending her dream college to the tune of $300,000 for a four-year degree, she will thank her parents later on.

Someone should knock that guidance counselor upside the head for making such a recommendation. What good is a fabulous art degree if you're financially enslaved for life? What was this guy thinking to encourage a 17-year-old kid to take on that kind of debt?

"Student loans are tricky to get rid of, presumably because we want to make sure our citizens are well-educated," claimed a bankruptcy attorney in a statement of utter drivel. "If they were easily dischargeable, lenders wouldn't give them out nearly as liberally."

Baloney. Since the late 1980s, college tuition has increased at a rate four times that of inflation and eight times that of household income. In most cases, it costs far more than can be recouped by salaries after graduation. This rise in tuition cost is driven solely by the ability to borrow such exorbitant sums. Student loans are just about the only loan you can get using your soul as collateral. 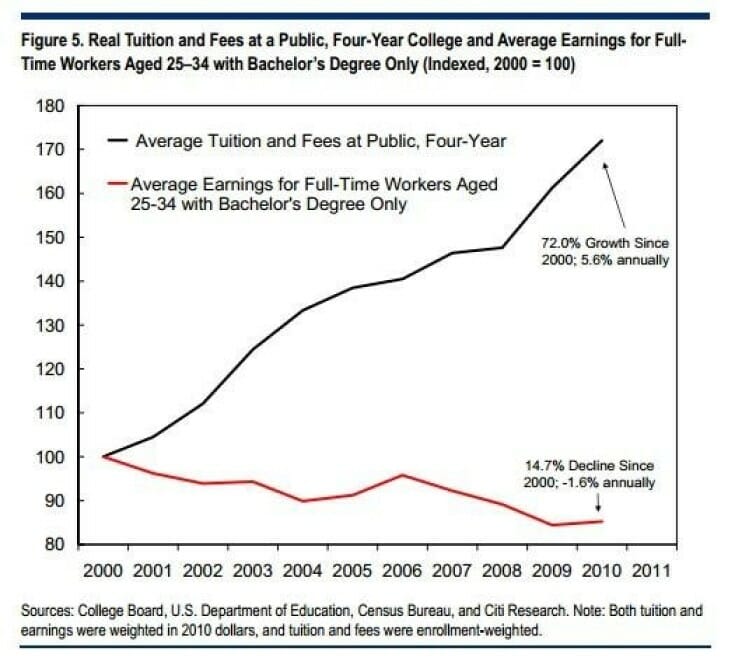 Banks wisely don't entrust 18-year-olds with $300,000 mortgages or other lending risks because they know teenagers aren't mature enough to handle that kind of responsibility. Yet 18-year-old students get that same risky loan shoveled at them with one signature for higher education, loans that can never be discharged in bankruptcy.

"The problem is the growing certainty that you were sold a false bill of goods about the immeasurable value of higher education, and that'll you'll be forever paying down the cost of a broken dream," notes one weary and debt-laden reporter named Anne Helen Petersen, who discovered that loan servicers were willfully misleading (i.e. lying to) clients about qualifying for the Public Service Loan Forgiveness (PSLF) program. "Keeping borrowers confused – and thus paying for longer, while interest and servicing fees accumulate – isn't a bug in the system. It's a feature."

So is the situation hopeless for graduates mired in staggering, unpayable debt? Perhaps not.

"For all the years I've been in debt, I've devoured stories of people who somehow managed to get out of it," wrote Petersen in another article entitled "12 People Talk Honestly About How They Paid Off Their Debt." "For these people, becoming debt-free was a simple matter of cutting out Starbucks and toning down your online shopping habit. But none of those things would make a dent in my insurmountable pile of student debt – or the debt of most people I know."

Peterson set out to find "detailed, deeply honest stories" of people who successfully paid off their student loans and other types of debt. The stories were filled with tales of utter frugality by those who dedicated every spare cent toward their financial burdens. People liquidated assets, went without (or lived in) vehicles, resided with parents or multiple roommates, bypassed new clothes, vacations and restaurants, and took as many sideline jobs as they could find. They delayed marriage, children and home ownership to focus on payments. In short, these people were obsessed – rightfully so – in eliminating their burden.

I applaud each and every person featured in this article. They showed it can be done. (Similar advice can be found here, here, and here.)

I don't blame graduates who acquire student loan debt. I blame those who urged them to acquire that debt to begin with – including loopy guidance counselors who think elite art schools for middle-class students are no big deal.

"We need to attack the issue at its core: predatory private lenders with high interest rates, tuition hikes, and the lack of education an 18-year-old gets making such a huge financial decision," wrote one graduate who paid off $102,000 in six years by working insane hours and living in yucky places.

The "college-industrial complex" is a broken system, yoking millions into lifelong enslavement. But unlike such debt burdens arising from medical expenses or personal disasters, acquiring student loans is still a voluntary act.