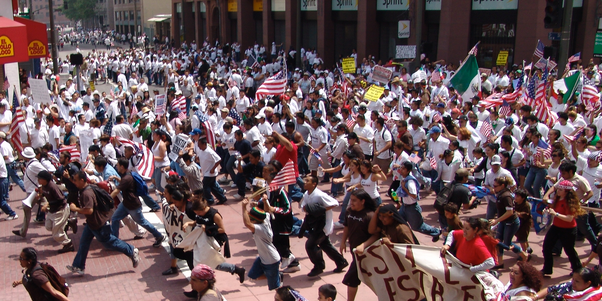 The Center for Immigration Studies found each household in America has been paying thousands of dollars in welfare benefits for illegals.

The U.S. Supreme Court on Monday gave the Trump administration a temporary victory in its fight to control the nation's borders.

By a 5-4 vote, the justices ordered the removal of a preliminary block on the rule.

Chief Justice John Roberts and the four justices in the conservative bloc sided with the administration.

CNBC reported the rule, proposed last August, is intended to prevent the arrival of immigrants who have used, or are likely to use, public benefits such as Medicaid and food stamps.

The decision is pending the resolution of the case in the 2nd U.S. Circuit Court of Appeals or the Supreme Court.

The justices explained the Department of Homeland Security began a rulemaking process to define the term "public charge" as it is used in the nation's immigration laws.

After a rule was issue, a lawsuit followed, with "a number of states, organizations, and individual plaintiffs variously alleging that the new definition violates the Constitution, the Administrative Procedure Act, and the immigrant laws themselves."

The plaintiffs are asked that the rule not be applied to "anyone."

A variety of lower-court opinions followed, and Justice Neil Gorsuch wrote: "If all of this is confusing, don't worry, because none of it matters much at this point. Despite the fluid state of things – some interim wins for the government over here, some preliminary relief for plaintiffs over there – we now have an injunction to rule them all: the one before us, in which a single judge in New York enjoined the government from applying the new definition to anyone, without regard to geography or participation in this or any other lawsuit."

The justice said the court rightly granted a stay allowing the government "to pursue (for now) its policy everywhere save Illinois."

"But, in light of all that's come before, it would be delusional to think that one stay today suffices to remedy the problem.

"The real problem here is the increasingly common practice of trial courts ordering relief that transcends the cases before them. Whether framed as injunctions of 'nationwide,' 'universal,' or 'cosmic' scope, these orders share the same basic flaw – they direct how the defendant must act toward persons who are not parties to the case."

The lower-court judges can order the government not to enforce a rule "against the plaintiffs in the case before it," but "when a court goes further than that, ordering the government to take (or not take) some action with respect to those who are strangers to the suit, it is hard to see how the court could still be acting in the judicial role of resolving cases and controversies."

The justice said such actions "raise serious questions about the scope of courts' equitable powers."

The Supreme Court, Gorsuch said, "must, at some point, confront these important objections."

Previously, only factors such as cash assistance and long-term hospitalization were considered.

Immigrant activists claimed the decision will hurt immigrants and target the poor.

At the Scotusblog site, an analysis explained the standard has been whether a noncitizen gets cash, health care or housing for more than 12 months over a three-year period.