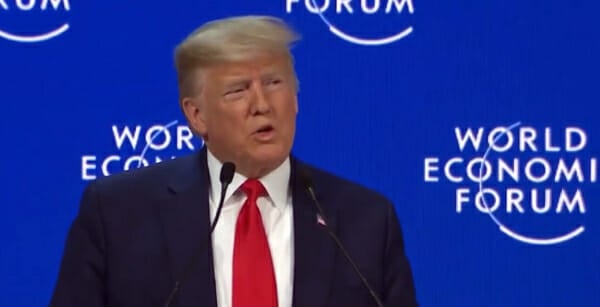 With teen climate-change icon Greta Thunberg in the audience along with world leaders, President Trump declared he rejects environmental "prophets of doom" in a speech Tuesday at the World Economic Forum in Davos, Switzerland.

"To embrace the possibilities of tomorrow we must reject the perennial prophets of doom and their predictions of the Apocalypse," he said.

"They are the heirs of yesterday's foolish fortune tellers, and they want to see us do badly but we won't let that happen."

Trump said they "predicted an overpopulation crisis in the 1960s, mass starvation in the 70s, and an end of oil in the 1990s."

"These alarmists always demand the same thing: absolute power to dominate, transform and control every aspect of our lives," he said.

Trump touted the health of the U.S. economy.

"America is thriving, America is flourishing, and, yes, America is winning again like never before," Trump said.

He said "the American dream is back," citing an employment rate of 3.5% amid an "economic boom the likes of which the world has never seen before."

"We will never let radical socialists destroy our economy, wreck our country or eradicate our liberty," Trump said. "America will always be the proud, strong and unyielding bastion of freedom."

He said that "in America, we understand what the pessimists refused to see."

"That a growing and vibrant market economy, focused on the future, lifts the human spirit and excites creativity: strong enough to overcome any challenge, any challenge by far," Trump said.

Thunberg: 'We are still telling you to panic'

After his speech, Trump described the Swedish teen Thunberg as "very angry" in an interview with the Wall Street Journal.

Thunberg, 17, addressing the forum shortly after Trump, called on leaders to stop investing in fossil fuels.

"I wonder, what will you tell your children was the reason to fail and leave them facing a climate chaos you knowingly brought upon them?" she asked the leaders.

"Our house is still on fire. Your inaction is fueling the flames by the hour," she said.

"We are still telling you to panic, and to act as if you loved your children above all else."