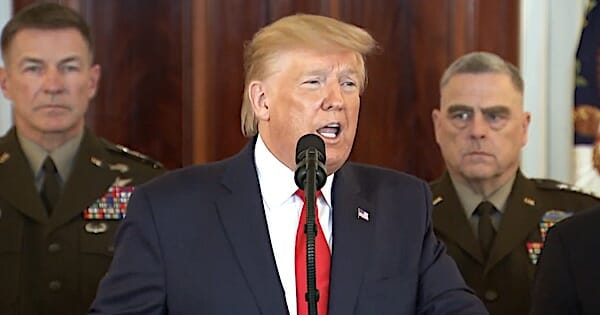 In his address to the nation Wednesday following Iran's retaliatory strike on U.S.-Iraq coalition airbases in Iraq, President Trump said the missiles used in the attack were "paid for" by the Obama administration.

"The missiles fired last night at us and our allies were paid for with the funds made available by the last administration," Trump said at the White House.

In 2016, President Obama sent $1.7 billion in cash to Iran to pay an old arbitration claim in exchange for the release of four American prisoners.

Trump said Iran "appears to be standing down" after the strike, which caused no casualties.

TRENDING: Trump on Virginia gun grab: 'It will never happen as long as I'm here'

"The American people should be extremely grateful and happy," Trump said. "No Americans were harmed in last night's attack by the Iranian regime."

The attack late Tuesday was a response to a U.S. airstrike that killed Iranian Quds Force Gen. Qassem Soleimani. The Trump administration says intelligence indicated Soleimani, blamed for the deaths of more than 600 American troops, was plotting new attacks within days.

Trump said that while Iran appears to be standing down, the U.S.
continues to evaluate options. The U.S. immediately imposed new economic sanctions "until Iran changes its behavior," he said.

"As long as I am president of the United States, Iran will never be allowed to have a nuclear weapon," Trump declared.

He called on the United Kingdom, Germany, France, Russia and China to join the U.S. in drop their support for the nuclear deal, insisting Iran "must abandon its nuclear ambitions and end its support for terrorism."

"The U.S. is ready to embrace peace with all who seek it," he said, emphasizing the U.S. has a "great military and equipment" that it hopes it will never be forced to use.

Overnight, according to U.S. Central Command, 10 Iranian missiles hit the Ain al-Asad Air Base, which houses U.S. troops. Another missile hit a U.S. military base in Erbil, in Kurdish territory, and four missiles missed their targets.

The Pentagon said in a statement late Tuesday that in "recent days and in response to Iranian threats and actions, the Department of Defense has taken all appropriate measures to safeguard our personnel and partners."

"These bases have been on high alert due to indications that the Iranian regime planned to attack our forces and interests in the region," the Pentagon said. "As we evaluate the situation and our response, we will take all necessary measures to protect and defend U.S. personnel, partners, and allies in the region."

Iran’s foreign minister said the targets in Iraq were chosen because they were used to by U.S. Special Operations forces to launch the drone strike that killed Soleimani.

Shortly after the missile strikes, Iran's Revolutionary Guard Corps warned the U.S. and its allies against retaliating.

"We are warning all American allies, who gave their bases to its terrorist army, that any territory that is the starting point of aggressive acts against Iran will be targeted," said the statement published by Iran’s state-run IRNA news agency.

Do we have a gun problem, or a government problem?

Impeachment trial: A travesty of a sham of a mockery of a sham

Hold your breath – coronavirus is coming!