Sekulow pointed out that when Trump was investigated in the House, he was "denied the right to cross-examine witnesses ... to access evidence ... the right to have counsel at hearings."

The reference was to Schiff reading into the congressional record his personal interpretation of the text of President Trump's July 25 phone call with Ukraine's president.

Listen to a brief section of his presentation to the Senate, in which the impeachment trial was begun on Tuesday:

"It's going to be a rough impeachment trial for Adam Schiff ... and it couldn't happen to a more deserving, bug-eyed little fella," said a post at Twitchy, which aggregates news on Twitter. 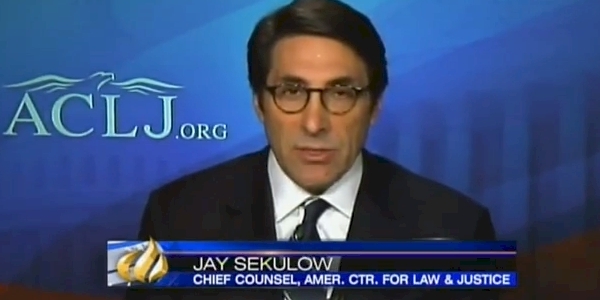 PJ Media reported Sekulow "quoted Democrats' own words against them. He condemned the House Democrats' rush to impeach Trump, adding an article of impeachment for 'Obstruction of Congress' rather than litigating a matter of executive privilege in court. He quoted House Speaker Nancy Pelosi (D-Calif.), Rep. Adam Schiff (D-Calif.), and Rep. Jerrold Nadler (D-N.Y.), each of whom defended Barack Obama's Attorney General Eric Holder when he was held in contempt of Congress in 2012."

Sekulow said: "Mr. Schiff did say the courts don't really have a role in this. Executive privilege? Why would that matter? It matters because it's based in the Constitution of the United States. The president's opponents in their rush to impeach have refused to wait for judicial review."

He also cited law professor Jonathan Turley, who had told Congress: "I can't emphasize this enough...if you impeach a president — if you make a high crime and misdemeanor of going to the courts, it is an abuse of power. It's your abuse of power. You're doing precisely what you're criticizing the president for doing."

Sekulow noted that Schiff wrote in 2012: "With respect to the Holder contempt proceedings, Mr. [impeachment] Manager Schiff wrote, 'the White House assertion [of privilege] is backed by decades of precedent that has recognized the need for the president and his senior advisors to receive candid advice and information from their top aides.'"

"Democrats defended Obama's executive privilege, but they're impeaching Trump when he exercises his," the report said.

Talk-radio host Rush Limbaugh took a buzz saw to Schiff over his work on Tuesday.

"This irritating little Pencil Neck creep, Adam Schiff, is bellyaching and whining and moaning over McConnell's lack of ability or willingness to call witnesses and it's just so unfair and (impression), 'Trump is so bad and Trump is so mean and he so cheated. He's gonna cheat again. Our elections are perverted, are — are — are corrupted. Trump did this and that and the other thing,' and they have no case. They’ve got no case," he said.

Schiff presented his rendition of Trump's phone call with Ukraine President Volodymyr Zelensky prior to the the Sept. 26 testimony of Acting Director of National Intelligence Joseph Maguire.

"We've been very good to your country, very good," Schiff said. "No other country has done as much as we have. But you know what? I don't see much reciprocity here. I hear what you want. I have a favor I want from you though. And I'm going to say this only seven times so you better listen good. I want you to make up dirt on my political opponent, understand. Lots of it. On this and on that. I'm going to put you in touch with people, not just any people, I am going to put you in touch with the attorney general of the United States, my Attorney General Bill Barr. He's got the whole weight of the American law enforcement behind him. And I'm going to put you in touch with Rudy. You're going to love him. Trust me. You know what I'm asking. And so I'm only going to say this a few more times. In a few more ways. And by the way, don’t call me again. I'll call you when you've done what I asked."

When Schiff later was called out for making up evidence, he described his "reading of the transcript" as a "parody."