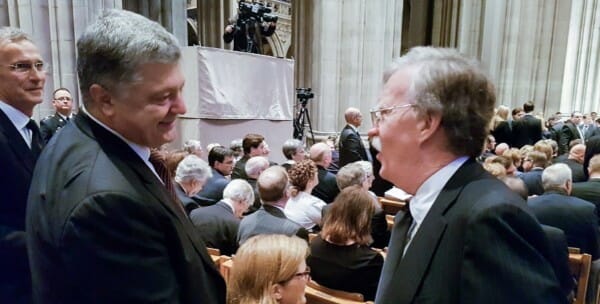 House Republicans argued during the impeachment investigation that the testimony against President Trump of Democratic-called witnesses amounted to a clash over foreign policy rather than any substantive claims of wrongdoing.

That already has become one of the White House's arguments in the Senate trial as it fends off the Democrats' effort to call former National Security Adviser John Bolton as a witness. Harvard Professor Alan Dershowitz argued in the Senate trial Monday night that "quid pro quos" are common in foreign policy. He concluded that even if true, the purported Bolton "bombshell" Sunday constitutes a dispute over foreign policy rather than an impeachable offense.

The push for witnesses was bolstered Sunday by a New York Times report citing an unpublished Bolton manuscript saying that Trump told him he wanted to condition security aid to Ukraine on investigations into Democrats, including former Vice President Joe Biden and his son, Hunter Biden.

The report has not been verified, and Trump and acting chief of staff Mick Mulvaney dispute the claim.

Regardless, it was clear that Trump fired Bolton after repeated policy feuds.

"His services are no longer needed at the White House," the president tweeted Sept. 10. "I disagreed strongly with many of his suggestions, as did others in the Administration."

In fact, Bolton's hiring in 2018 was a surprise as he had been associated with the "neo-conservatives" of the George W. Bush administration who orchestrated the 2003 Iraq war and the "nation-building" effort that Trump has called "a big mistake."

Kentucky Republican Sen. Rand Paul, who has touted Trump's stated policy of avoiding "endless war," once described Bolton in an op-ed as "hell-bent on repeating virtually every foreign policy mistake the US has made in the last 15 years."

Shortly before he was appointed by Trump, Bolton wrote an op-ed for the Wall Street Journal making the case for a pre-emptive strike on North Korea.

After his appointment, however, he revised his view, saying, "You have to know in advance the president's views are not always yours."

In January 2019, Bolton outlined conditions for withdrawal of U.S. forces from Syria that appeared to contradict Trump's announcement of victory over ISIS and a hasty withdrawal from Syria. Bolton said the withdrawal from Syria would not be immediate but contingent upon the achievement of certain objectives, including assured protection for the Kurds and total defeat of ISIS.

In early 2019, Bush accused Bolton of trying to drag the U.S. into a war with Venezuela.

Bolton, according to the House testimony of former National Security Council Russia expert Fiona Hill, said her boss Bolton instructed her to tell lawyers she was not part of the "drug deal" EU Ambassador Gordon Sondland and acting chief of staff Mick Mulvaney were "cooking up" to pressure Ukraine.

The whistleblower complaint that triggered the impeachment investigation alleged Trump used the threat of withholding lethal aid to pressure Ukraine to dig up dirt on a political rival.

The White House argues the delayed aid was delivered before the deadline and there was no investigation of Joe and Hunter Biden. Ukraine President Volodymyr Zelensky has said he he didn't feel any pressure, and the State Department itself was concerned that Hunter Biden's profiting from a corrupt Ukraine natural gas company while his father was in charge of Ukraine policy was an apparent conflict of interest.

Significantly, Dershowitz on Monday night, as a member of Trump's team, argued that "quid pro quo" in itself is not an abuse of power.

It's rather a regular method of conducting foreign policy, he said, acknowledging that he may disagree with particular quid pro quos.

"Even if a president were to demand a quid pro quo as a condition to sending aid to a foreign country, that would not by itself constitute an abuse of power," he said.

"Nothing in the Bolton revelations, even if true, would rise to the level of an abuse of power or an impeachable offense," he said.

A policy difference, he emphasized, is not criteria for impeachment.

"That's a criteria for deciding who you're going to vote for," Dershowitz told the Senate.

"Don't allow your subjective judgments to determine what is and what is not an impeachable offense."

A Bolton ally, Fred Fleitz, who served in 2018 as deputy assistant to the president and to the chief of staff of the National Security Council, is advising Bolton to withdraw his upcoming tell-all book on his time as Trump's national security adviser.

In an op-ed for Fox News, Fleitz emphasized the "importance of protecting a president’s confidential discussions with his senior advisers."

Fleitz, now president of the Center for Security Policy in Washington, noted he's known Bolton for 30 years and served as his chief of staff twice.

Describing him as an "exceptional national security expert and a man of great integrity," he expressed sorrow that "the courageous and visionary national security adviser left the White House after the relationship broke down."

He said Bolton "played an important role in some of President Trump's most successful foreign policy decisions, including withdrawing from the nuclear deal with Iran, moving the American embassy in Israel to Jerusalem and the 2018 Counterterrorism Strategy."

But he argued a president "must be able to candidly consult with their advisers without worrying they will leak these discussions to the press or obtain high-dollar book contracts to publish them."

"A book by a former national security adviser ahead of a president’s reelection bid may set a dangerous precedent since it could discourage future presidents from seeking advice from expert advisers on sensitive national security matters," he said.

Fleitz said he hasn't seen the manuscript, and he takes Bolton and his staff at their word that they did not leak the manuscript to the New York Times.

"But I believe they are still responsible for this leak since Bolton’s explosive book was sent to the leak-prone National Security Council for a security review in December 2019 so the book could be published in the spring of 2020," he said.

"It also is inexplicable how such a sensitive manuscript could be sent to the NSC in the middle of the impeachment process. Under such circumstances, a leak of the manuscript was all but certain."

Fleitz concluded that if a manuscript of this sensitivity were to be published, it should happen after the election.

"I don't understand the need for a former National Security Adviser to publish a tell-all book critical of a president he served, especially during a presidential reelection campaign that will determine the fate of the country," he said.

"There will be a time for Bolton to speak out without appearing to try to tip a presidential election."

Trump: I never told him that

President Trump on Monday denied Bolton's claim that the president told him he wanted to condition aid to Ukraine on an investigation of the Bidens.

"I NEVER told John Bolton that the aid to Ukraine was tied to investigations into Democrats, including the Bidens," the president said via Twitter. "In fact, he never complained about this at the time of his very public termination. If John Bolton said this, it was only to sell a book.

"With that being said, the transcripts of my calls with President Zelensky are all the proof that is needed, in addition to the fact that President Zelensky & the Foreign Minister of Ukraine said there was no pressure and no problems."

In addition, Trump said, he met with Zelensky at the United Nations, although the Democrats denied that fact.

Trump further argued he "released the military aid to Ukraine without any conditions or investigations -- and far ahead of schedule."

"I also allowed Ukraine to purchase Javelin anti-tank missiles. My Administration has done far more than the previous Administration," he said.