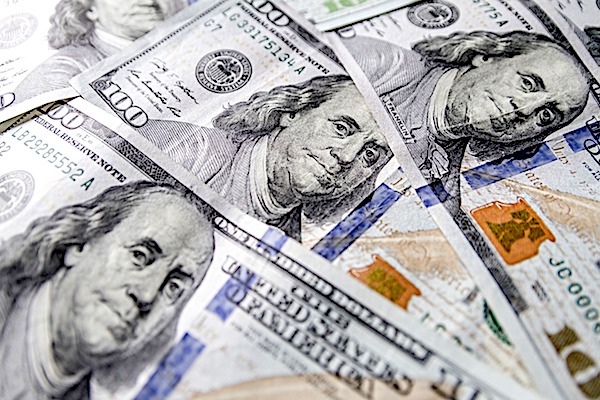 Just the fact that a woman was moving her family's $82,000 to a bank in a nearby state, requiring her to fly with the cash.

Now the family is suing to get it back.

The Institute for Justice is defending Terry Rolin and his daughter, Rebecca Brown.

"Flying with any amount of cash is completely legal, but once again we see government agents treating American citizens like criminals," explained IJ Senior Attorney Dan Alban. "You don't forfeit your constitutional rights when you try to board an airplane. It is time for TSA and federal law enforcement to stop seizing cash from travelers simply because the government considers certain amounts of cash 'suspicious.'"

IJ explained it's the third time it's handled such a case. In Houston, it sued over $41,000 taken from a nurse traveling to Nigeria to open a medical clinic. In Cleveland, it sued after the CBP seized $58,000 from a man planning to purchase a home for retirement.

Both cases ended with the money being returned.

In the new case, IJ explained Rolin's life savings of $82,373 was seized by the federal government for no apparent reason.

His daughter was moving the money to a bank in her hometown in Massachusetts for her father's health care and other needs.

At the Pittsburgh airport, she was first confronted by the TSA about the money she had in her purse. A short time later, a deputy and a DEA agent simply took it.

Explained IJ: "Terry, 79, is a retired railroad engineer born and raised in Pittsburgh. For many years, he followed his parents' habit of hiding money in the basement of their home. When Terry moved out of his family home and into a smaller apartment, he became uncomfortable with keeping a large amount of cash. Last summer, when his daughter Rebecca was home for a family event, Terry asked her to take the money and open a new joint bank account that he could use to pay for dental work and to fix his truck, among other needs."

But Pennsylvania State Troopers worked with TSA and DEA agents to make sure the money stayed in Pittsburgh with them.

Months later, the government agents, still in possession of the money, gave notice they intended to keep it.

IJ said the lawsuit seeks the return of the money but "also aims to stop the unconstitutional and unlawful practices of TSA and DEA with class action claims and a claim against the DEA agent."

The charges come in a lawsuit filed in U.S. District Court for the Western District of Pennsylvania.

Defendants are the TSA, DEA, David Pekoske, Uttam Dhillon and unknown others.

"My father and his parents worked hard for this money, and the government shouldn’t be able to reach into his pocket and take it," said Rebecca Brown. "We did nothing wrong and haven’t been charged with any crime, yet the DEA is trying to take my father’s life savings. His savings should be returned right away, and the government should stop taking money from Americans who are doing something completely legal."

"It’s become routine for law enforcement to seize money first and ask questions later," said IJ Attorney Jaba Tsitsuashvili. "The government shouldn’t be able to take someone’s life savings without a related criminal conviction. Unfortunately, people like Terry across the country are forced to fight to prove their innocence just to keep money or property they worked hard to earn. This abuse needs to end."

The complaint also seeks to turn it into a class action lawsuit on behalf of the thousands of people who likely have lost millions of dollars to the government through confiscation.