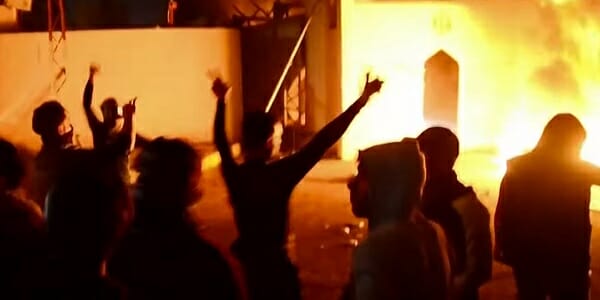 The United States might be forced to take preemptive action to protect American lives in response to indications Iran or its forces are planning additional attacks, Defense Secretary Mark Esper said Thursday.

"The game has changed and we are prepared to do what is necessary to defend our personnel and our interests and our partners in the region," Esper told reporters at a briefing, Reuters reported.

On Tuesday, Iranian-backed militia and their supporters stormed the U.S. Embassy, chanting "Death to America" and "Allahu Akbar," prompting President Trump to call for an immediate response. The president deployed 100 U.S. Marines, and American troops dropped flares from aircraft and fired tear gas to disperse the militia.

The unrest followed U.S. airstrikes on Sunday against bases of the Iran-backed Kataib Hezbollah group in retaliation for missile attacks that killed a U.S. contractor in northern Iraq last week.

At the press briefing Thursday, the chairman of the Joint Chiefs of Staff, Mark Milley, said Kataib Hezbollah has been carrying out a campaign against U.S. personnel since at least October.

The missile attack last week in northern Iraq was meant to be deadly, he said.

"Thirty-one rockets aren't designed as a warning shot, that is designed to inflict damage and kill," Milley said.

He warned that anyone who tries to overrun the U.S. Embassy will be met by a "buzzsaw."

The United States sent 750 troops to Kuwait earlier this week. Reuters reported U.S. officials said an additional 3,000 troops could be sent to the region in the coming days.

Esper said in a statement that the demonstrations outside the U.S. Embassy in Baghdad were carried out by Iranian-backed Shiite militia.

He said leaders were seen in the crowd, and some members showed up wearing their uniforms.

Iran: 'Not afraid of war'

Meanwhile, a top Iranian general declared Thursday that Iran was not afraid of war, reacting to President Trump's tweet that he was holding Tehran "fully responsible" for the embassy siege.

"We are not leading the country to war, but we are not afraid of any war and we tell America to speak correctly with the Iranian nation," said Brig. Gen. Hossein Salami, the commander of the Revolutionary Guards.

"We have the power to break them several times over and are not worried," he said.

Trump wrote on Twitter on Tuesday that Iran would be "held fully responsible for lives lost, or damage incurred, at any of our facilities."

"They will pay a very BIG PRICE! This is not a Warning, it is a Threat," the president wrote.

In an Oct. 30 editorial in the Iranian daily newspaper Kayhan, Khamenei wrote: "Why haven't Iraqi youths ended the presence of the US embassy in Baghdad? Why haven't you thrown out this infected wound from your holy land?"

The leader of one of the militias involved in the raid Tuesday, Hadi Ameri of the Badr Corps, visited the White House under President Obama in 2011.

A FoxNews.com report in December 2011 said Ameri's presence was "alarming some who say Iraq's growing ties to Iran are among the most worrisome aspect of a U.S. pullout."

Did you know Badr Corps chief Hadi Ameri, who led today's raid on the US Embassy in Iraq, was once invited to the @WhiteHouse by @BarackObama?
FYI: Ameri & the Badr Corps get their salary & orders from Iran's dictator Ali Khamenei.