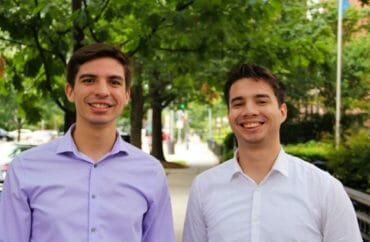 As an increasing number of American college students embrace socialism, two young Venezuelans who witnessed the destruction of their country through Hugo Chavez's "revolution" are visiting U.S. campuses with a message of warning.

He's been joined on the tour by Jorge Galicia, 24, reports the College Fix.

"No one else can know what happened in Venezuela but a Venezuelan, and we are experts on that," Galicia said.

The two were liberty-minded student political activists in Venezuela who came to the U.S. to participate in various academic-intellectual programs. The turmoil in their home country prompted them to delay their return and seek asylum.

In a joint interview with the College Fix on Wednesday, Galicia noted polls show a majority of students in college say they support socialist ideas.

"Maybe they don't know exactly what is going on in Venezuela," Galicia said.

Guilarte, who came to the U.S. in January 2019, said their message is a warning.

"We are eyewitnesses of the falling of the country. We are telling them we used to have rights like you have here. You can go to the supermarket, buy everything, you can have money for the month," he said.

"We used to be just like everybody else. But now [in Venezuela] we've ended up at the bottom of every single economic index you can find. You don't have to take for granted your liberties — and you don't have to wait until you lose them to fight for them."

See a Project Venezuela video with Galicia and Guilarte:

Galicia, who came to the U.S. in October 2018, emphasized that socialism offers a false promise.

"Who in the world wouldn’t want to have free health care, free college tuition, free whatever — the thing is those kinds of offers are not sustainable in the longterm," he said. "I know it is tempting, but do not fall into that trap. You need to learn from other people’s experience. Keep your liberty protected, because what you have, it’s a beautiful country."

The College Fix said their speaking project -- titled "Venezuela: My Story … Your Future?" -- is funded and coordinated by The Fund for American Studies.

The aim is for students to "hear the real-life stories of Venezuelan asylum seekers."

They told The College Fix they tells students that socialism is at the root of the oppression, turmoil and poverty om their country.

And they say America is headed in the same direction.

"It is important to teach young audiences; they are the most vulnerable audience when it comes to being engaged with socialist ideas," Galicia said.

Youth "are always looking for a revolution, looking for a way to change the system," he said. "Maybe they feel socialism is the way to do that."

But if they, as the next generation of leaders, choose that way, Galicia he said, America is destined for a "horrible future."