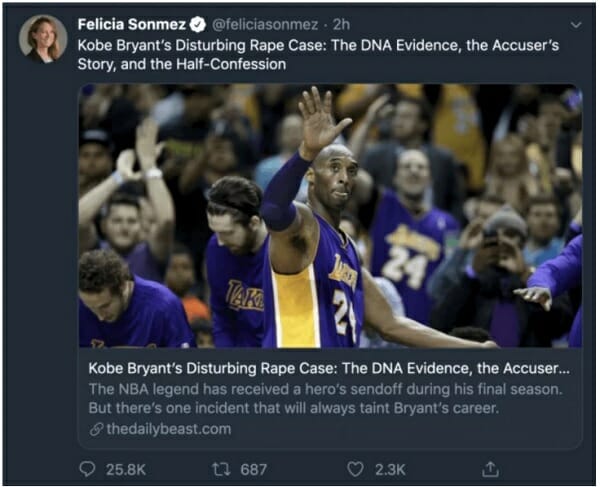 The lives of celebrities, good and bad, always get a rehashing when they die. But it's mostly the good.

When former NBA star Kobe Bryant died in a helicopter crash over the weekend the praise was fulsome.

But a Washington Post reporter thought the grieving public should be reminded of the rape claims he faced in Colorado in 2003.

She linked to a Daily Beast report headlined "Kobe Bryant's Disturbing Rape Case: The DNA Evidence, the Accuser's Story, and the Half-Confession."

A 19-year-old hotel employee alleged the then-24-year-old Bryant assaulted her. The case never went to trial as the employee declined to testify, and months later, a civil lawsuit was settled for undisclosed terms.

One Twitter user wrote: '@washingtonpost you should #firefeliciasonmez for this classless and heartless post with the passing of an iconic superstar HOURS after a horrific crash that also killed his daughter and seven others along with them."

Sonmez, a national political reporter, responded by complaining about the "10,000 people (literally)" who emailed abuse or threats.

"Please take a moment and read the story – which was written 3+ years ago and not by me," she said.

Washington Post managing editor Tracy Grant said the reporter was on "administrative leave" and has deleted the tweets.

Grant said a review was underway regarding whether the posting "violated" newsroom policy.