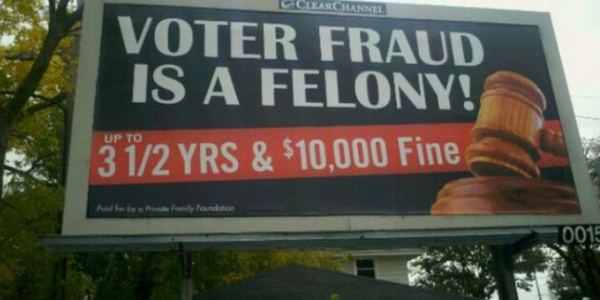 Government watchdog Judicial Watch is warning 19 large counties in five states that they will be sued unless they clean up their voting registration lists.

A total of at least 2.5 million ineligible voters are registered in those counties, Judicial Watch said Thursday in demand letters to county officials.

The organization is pressing states and counties to follow the National Voter Registration Act of 1993, which "requires jurisdictions to take reasonable efforts to remove ineligible registrations from its rolls."

But he said more needs to be done.

"It is common sense that voters who die or move away be removed from the voting rolls," Fitton said.

In 2018, the U.S. Supreme Court upheld a massive voter-roll cleanup that resulted from a Judicial Watch settlement of a federal lawsuit with Ohio. Judicial Watch also settled a similar case against California that resulted in removing up to 1.5 million "inactive" names from the voting rolls in Los Angeles County alone.

And, Judicial Watch said, Kentucky began a cleanup of 250,000 names last year as part of a consent decree.

In its analysis of data released by the U.S. Election Assistance Commission this year, Judicial Watch found 378 counties nationwide that have more voter registrations than citizens of voting age.

In other words, voter registration exceeds 100% in those counties.

"These 378 counties combined had about 2.5 million registrations over the 100%-registered mark, which is a drop of about one million from Judicial Watch's previous analysis of voter registration data."

Judicial Watch said an "unusually high registration rate suggests that a jurisdiction is not removing voters who have died or who have moved elsewhere, as required by [federal law]."

Heritage said it was not an exhaustive or comprehensive list, but the intent was "to demonstrate the many ways fraud is committed."

Among the methods were forging the signatures of registered voters, buying votes, duplicate voting, false registrations, fraudulent use of absentee ballots and illegal "assistance" at the polls.

After the November 2018 election, altered election forms in several Florida counties were reported to federal prosecutors to review for possible election fraud.

Nearly 2 million voters remained on the rolls after their deaths, according to a 2012 Pew study.

WND assembled a long list of vote fraud reports following the 2012 election. In one jurisdiction, 108 percent of registered voters voted for Barack Obama.