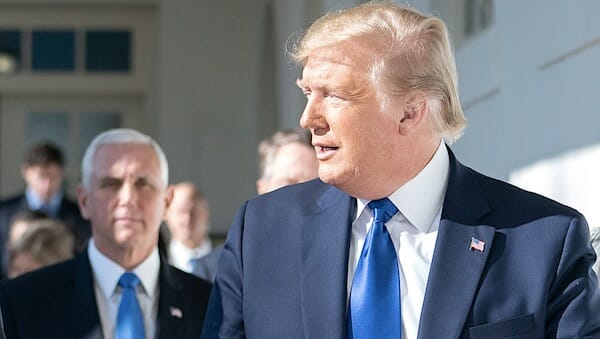 Lawyers for President Trump on Monday submitted to the U.S. Senate a brief that asserts House Democrats are relying on "constitutionally deficient" articles of impeachment and warning that the "theories" on which they rely would "do lasting damage to the separation of powers under the Constitution."

The Democrats' work product, the brief charges, is the result "of an unprecedented and unconstitutional process that denied the president every basic right guaranteed by the Due Process Clause and fundamental principles of fairness."

"The Senate should reject the articles of impeachment and acquit the president immediately," the White House lawyers say.

The document was submitted by White House counsels Jay Sekulow and Pat Cipollone in response to articles of impeachment passed in a partisan vote led by House Speaker Nancy Pelosi.

The articles of abuse of power and obstruction of Congress center on a whistleblower's complaint that President Trump threatened to withhold U.S. aid to pressure the Ukrainian president to announce an investigation of a "political rival."

The White House argues the aid was delivered by the deadline, there was no announcement of an investigation and there is legitimate concern about possible corruption by Joe Biden and his son Hunter.

Hunter Biden received $83,000 a month from the Ukrainian natural gas company Burisma while his father was the overseer of Ukraine policy. Further, Joe Biden publicly boasted of threatening to withhold $1 billion in U.S. aid if Ukraine's president did not fire the country's top prosecutor, who was investigating Burisma at the time.

'Affront to the Constitution'

The Senate trial is scheduled to begin Tuesday. A supermajority of 67 senators is required to convict, which is unlikely with Republicans holding a 53-seat majority.

"The articles of impeachment now before the Senate are an affront to the Constitution and to our democratic institutes," the lawyers told the Senate. "The articles themselves – and the rigged process that brought them here – are a brazenly political act by House Democrats that must be rejected. They debase the grave power of impeachment and disdain the solemn responsibility that power entails.

"All that House Democrats have succeeded in proving is that the president did absolutely nothing wrong."

The accusations are "flimsy" and do not include any allegation of a violation of the law, much less "high crimes and misdemeanors," as required by the Constitution," they said.

"They do not remotely approach the constitutional threshold for removing a president from office."

First, the filing explains, the articles "do not identify any impeachable offense."

"House Democrats' 'abuse of power' theory collapses at the threshold because it fails to allege any violation of law whatsoever," they contended.

Further, "House Democrats' concocted theory that the president can be impeached for taking permissible actions if he does them for what they believe to be the wrong reasons would also expand the impeachment power beyond constitutional bounds. It would allow a hostile House to attack almost any presidential action by challenging president's subjective motives."

And there can be no question about the president's ignoring or disregarding "United States foreign policy," because it is the president, not hired bureaucrats, who sets that policy.

The Democrats' theory of obstruction of Congress article is "frivolous and dangerous," the brief says.

The president relied on executive privilege and the opinion of the DOJ's Office of Legal Counsel in his decision to withhold the testimony of his counselors, the lawyers argue.

The House subpoenas "had no legal force."

And, the brief argues, "defending the separation of powers is not an impeachable offense."

Law professor Jonathan Turley, they point out, told the House Judiciary Committee, "Basing impeachment on this obstruction theory would itself be an abuse of power ... by Congress."

And the House never authorized an impeachment inquiry, which was pursued only by Democrats.

The brief alleges corruption by the Democrats.

"The moment the president was sworn in, the Washington Post reported partisans had launched a campaign to impeach him. The current proceedings began with a complaint prepared with the assistance of a lawyer who declared in 2017 that he would use 'impeachment' to effect a 'coup.'"