Nearly 40 years ago, an unidentified woman's body was found near a riverbank in Oklahoma. The woman had been shot to death and covered in a mixture of quicklime in a possible-but-failed attempt to accelerate the decaying process.

She quickly became known as the "Lime Lady" as her case gained national attention, but despite the media coverage, investigators were unable to identify her or her killer.

Thanks to modern advancements in technology, however, officials were finally able to identify the woman this year, bringing them one step closer to solving the case. 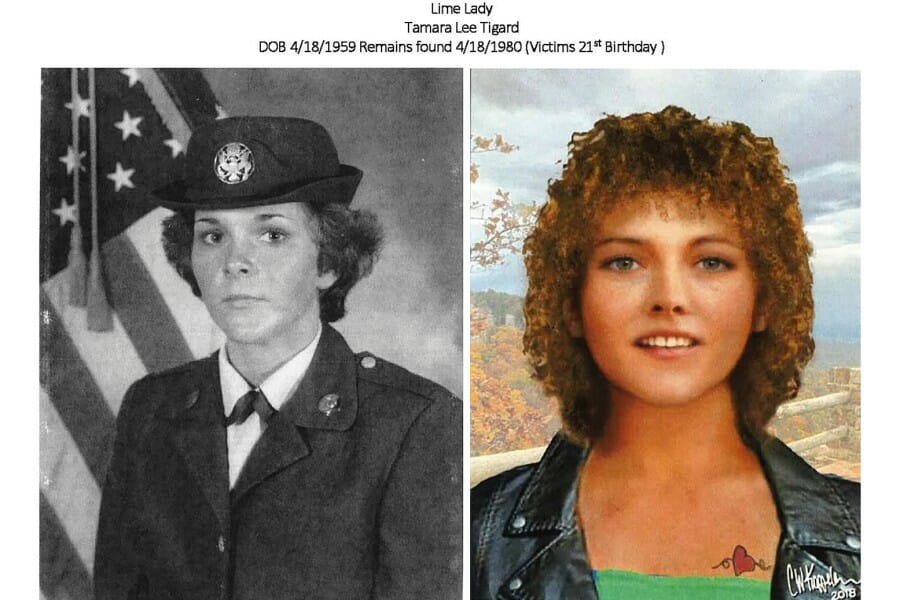 Investigators in Oklahoma identified the body of a Jane Doe, known as 'Lime Lady,' who was found nearly 40 years ago. (Oklahoma County Sheriff's Office)

According to an Oklahoma County Sheriff's Office news release, Tigard's body was found on April 18, 1980 -- her 21st birthday -- on a riverbank. She wasn't wearing any clothes and had been shot in the chest several times with a .45 caliber handgun.

After her body was dumped, it was covered in a mixture of quicklime in a possible attempt to speed up the decaying process, but the wrong kind of lime was used; instead her corpse was preserved.

The main identifying factor investigators had for the woman was a tattoo of a heart and scroll on the left side of her chest.

"The initial investigation determined Tigard was shot at a different location, then her body taken to the river site," the department wrote. "Investigators used traditional techniques attempting to identify Tigard, but all efforts failed."

DNA Doe Project assists law enforcement agencies with the identification of remains through the process of genetic genealogy.

Once the nonprofit extracts DNA from the unidentified remains, its researchers upload the file to genealogy websites such as GEDMatch or Family Tree DNA in hopes of finding people who share DNA with the John or Jane Doe.

“If we happen to get lucky -- which doesn’t happen all that often -- it could be someone as close as a sibling or half-sibling, or aunt, uncle, cousin, things like that, but generally the DNA matches we get back are more like a second cousin or further away,” Kevin Lord of the DNA Doe Project told The Western Journal in October 2019.

“From there we build out family trees for the closest DNA matches or the ones we determine to be relevant and by building out the family of all of those DNA matches we can see where those family trees intersect with each other.”

After Tigard's DNA profile was built, volunteer genealogists from DNA Doe Project found a likely name in just a day-and-a-half, according to a news release from the nonprofit.

Investigators learned Tigard served in the U.S. Army, and with assistance from the Oklahoma Medical Examiner's Office, they were able to obtain dental records which confirmed her identity.

Tigard, who was living in Nevada, was reported missing after she went for a walk and never returned about a month before her body was discovered. However, a woman in Ohio was using her identity around the time she was reported missing, according to Army Times, and Tigard was cleared from the missing persons case.

Even though Tigard doesn't have any living immediate family members, Captain Bob Green said the identification of Tigard's body not only restores her dignity, but also brings them one step closer to solving the case.

"I always just wanted to bring dignity to the victim in this case,” Capt. Green said in the department's statement. “All of these years she has been gone without a trace, with none of her family or acquaintances knowing what happened to her.

"I just couldn’t give up, and now we know who she is due to the hard work of the DNA Doe Project with assistance from the Oklahoma Medical Examiner’s Office, and I am so thankful for their efforts in helping us in this case.”

"Now she can be properly recognized,” he added, “her life has meaning and we can respectfully honor her.”

Man pleads guilty to extortion of $25 million from Matt Gaetz