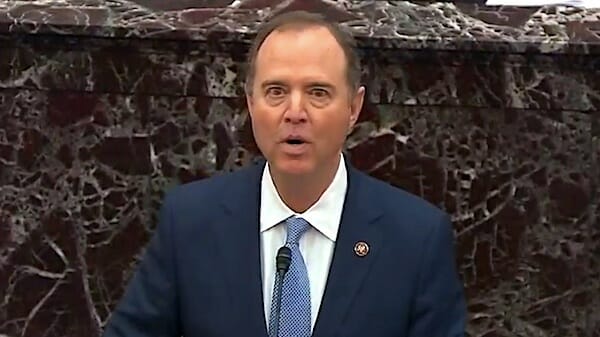 Was it a "parody" or some other form of irony, or does lead House impeachment manager Rep. Adam Schiff, D-Calif., truly fear that Trump might give Alaska to the Russians in exchange for their support in the 2020 election?

In his closing remarks Monday, Schiff warned the senators that if they didn't remove Trump from office, he would be emboldened to abuse his power.

"If abuse of power is not impeachable ... Trump could offer Alaska to the Russians in exchange for support in the next election or decide to move to Mar-a-Lago permanently and let Jared Kushner run the country, delegating to him the decision whether to go to war," Schiff said.

"Because those things are not necessarily criminal, this argument would allow that he could not be impeached for such abuses of power. Of course, this would be absurd. More than absurd, it would be dangerous."

Schiff and his Democratic colleagues claim Trump used the withholding of U.S. aide to pressure Ukraine to "dig up dirt on a political rival," former Vice President Joe Biden. The White House argues the aid was delivered on time and Trump had a duty as president to investigate corruption, for which his team presented evidence.

Schiff still invokes the debunked claim that Trump colluded with Russia to influence the 2016 election, contending he's trying to do it "again" in 2020 and must be removed from office.

But the Democrat's credibility took a severe hit when Robert Mueller's special counsel report concluded there was no collusion after Schiff had been claiming for more than two years that he had secret, smoking-gun evidence.

And during a House hearing in September to examine the "whistleblower" complaint that triggered the impeachment, Schiff read a made-up version of the July 25 phone call between President Trump and Ukraine President Volodymyr Zelensky at the heart of the case.

Responding to criticism for making the call sound like a Mob-boss shakedown, Schiff later insisted it was just a "parody."

An independent candidate challenging Schiff for his House seat, Jennifer Barbosa, tweeted that the California Democrat's comment was an "insult to our intelligence," FoxNews.com reported.

Alaska, under President Lincoln, was purchased from Russia in 1867 for the equivalent of about $120 million in today's dollars at the behest of Secretary of State William Seward. The deal initially was mocked as "Seward's folly," but Alaska, with it's abundance of oil reserves, became the 49th state in 1959.