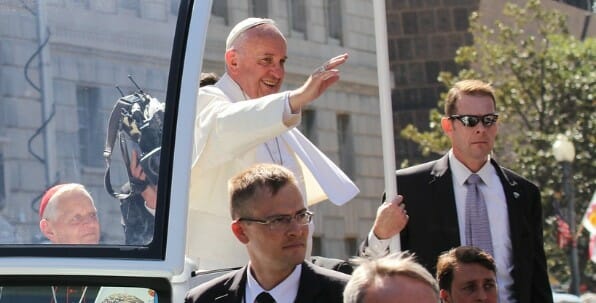 Calling tax cuts for the wealthy a "sin," Pope Francis claimed poverty is on the rise worldwide despite statistics showing an astonishing reduction in global poverty over the last 30 years corresponding with the spread of free enterprise.

Addressing a Vatican seminar, Francis asserted "the poor increase around us." Last June, as Breitbart noted, the pope claimed "the poor are always poorer, and today they are poorer than ever."

However, a Brookings Institution report in 2018 showed the opposite is true, with "extreme poverty" at the lowest recorded level in human history, at less than 8%.

"Extreme poverty" is defined as living on less than $1.90 per day or its equivalent. And just 30 years ago, the "extreme poverty" rate was 37%, while two centuries ago nearly everyone was in that category.

The pope, nevertheless, lamented that the per capita annual income in the world this year will be $12,000 "according to official reports."

However, the World Bank found the figure to be $17,948. And, significantly, per capita annual income has been increasing dramatically each year, rising 200% since 1990.

While countries such as China and India have dramatically reduced poverty by opening the door to free enterprise, Francis insisted the wealthy should put more money in the government welfare state rather than be allowed to keep more of what they earn.

He said tax cuts for every citizen, including the wealthy, are a "structure of sin."

"Every year hundreds of billions of dollars, which should be paid in taxes to fund health care and education, accumulate in tax haven accounts, thus impeding the possibility of the dignified and sustained development of all social agents," he said.

The pontiff also decried the "wealth gap," ignoring that fact that economic prosperity makes life better for everyone and that the wealthy are investing their riches in enterprises that create jobs.

"If extreme poverty exists in the midst of wealth (also extreme) it is because we have allowed the gap to widen to become the largest in history," the pope said. "The world’s 50 richest people have $2.2 trillion worth of assets. These 50 people alone could fund the health care and education of every poor child in the world, whether through taxes, philanthropic initiatives, or both."