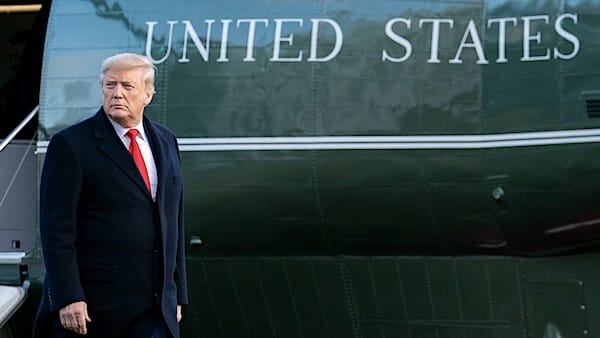 Asked if he thought establishment media coverage of his handling of the coronavirus was "a hoax," President Trump answered in the affirmative as he prepared to leave Friday for a rally in South Carolina.

Trump said some Democratic leaders are handling the issue "the way it should be," but others are trying to gain political favor by saying a lot of untruths."

The Associated Press fact-checked claims by Democrats about Trump's handling of the virus, concluding they were presenting a "distorted picture."

Candidates, for example, are wrong to say Trump has cut the budgets of key agencies such as the Centers for Disease Control.

Friday afternoon, the president touted his decision to restrict entry to the U.S. from China, where the virus originated. More than 2,800 deaths have been attributed to the coronavirus, mostly in China.

"Had that decision had not been made, it could be a much different story," he said.

“So, the Coronavirus, which started in China and spread to various countries throughout the world, but very slowly in the U.S. because President Trump closed our border, and ended flights, VERY EARLY, is now being blamed, by the Do Nothing Democrats, to be the fault of ‘Trump,'" he wrote.

Trump's acting chief of staff, Mick Mulvaney, sought to put the outbreak in context in a speech at the Conservative Political Action Conference.

"The flu kills people," he said. "This is not Ebola. It's not SARS, it’s not MERS. It's not a death sentence, it’s not the same as the Ebola crisis."

Mulvaney said the reason Democrats and media are giving so much attention to the coronavirus "is that they think this is going to be the thing that brings down the president."

"That's what this is all about," he said.

Five reasons not to panic

Joel B. Pollak, senior editor-at-large at Breitbart News, agrees with Mulvaney that while the coronavirus is an "unpleasant respiratory illness," it's not an organ-destroying horror like Ebola.

Precautions are being taken, a vaccine will emerge, and life will continue as usual," he said.

He offer five specific reasons not to panic.

1. The coronavirus is a familiar illness and not as bad as others. It is from the SARS family and less deadly.

2. The U.S. response has been exceptionally good, with only 16 cases thus far, and none have been deadly. President Trump stopped travel to China last month, which critics said at the time was an overly drastic step.

3. Private companies in the U.S. and around the world are racing to develop a vaccine.

4. The number of cases in China sounds large until you consider the size of China.