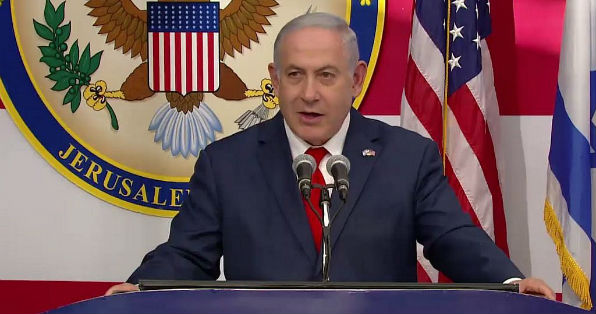 Democratic presidential front-runner Bernie Sanders says he would consider moving the U.S. Embassy in Israel from Jerusalem to Tel Aviv.

The question was posed to the Vermont senator during the Democratic presidential debate Tuesday night in South Carolina.

CBS News moderator Major Garrett asked Sanders, "What would you say to American Jews who might be concerned you're not, from their perspective, supportive enough of Israel, and specifically, would you move the U.S. Embassy back to Tel Aviv?"

"The answer is it's something we would take into consideration," Sanders said.

"I am very proud of being Jewish. I actually lived in Israel for some months," he continued. "But what I happen to believe is that right now, sadly, tragically, in Israel, through Bibi Netanyahu, you have a reactionary racist who is now running that country."

Sanders said U.S. foreign policy in the Middle East "should be about absolutely protecting the independence and security of Israel, but you cannot ignore the suffering of the Palestinian people."

"We have got to have a policy that reaches out to the Palestinians and the Americans. That will come within the context of bringing nations together in the Mideast," Sanders said.

During the debate, former New York City Mayor Mike Bloomberg, who also is Jewish, said he would keep the embassy in Jerusalem.

"You can't move the embassy back," Bloomberg said. "We should not have done it without getting something from the Israeli government, but it was done and you’re going to have to leave it there."

Trump moved the embassy to Israel's capital in compliance with the Jerusalem Embassy Act. The law recognizing Jerusalem as Israel's capital was passed by Congress in 1995, but every president since then had signed a waiver every six months delaying enactment of the law on "national security" grounds.