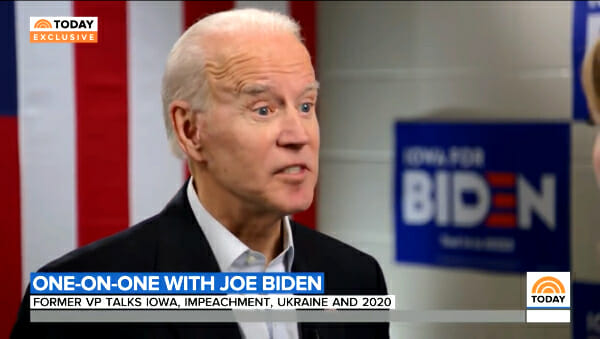 Democratic presidential candidate Joe Biden got testy with the "Today" show's Savannah Guthrie for confronting him about the conflict of interest in his son Hunter's position with a corrupt Ukrainian firm.

Biden charged in an interview aired Monday that Guthrie didn't know what she was talking about as she pressed him on an arrangement that "seems kind of sleazy" to many people.

The former vice president – who was the point man for Ukraine policy while his son was paid $1 million a year by a Ukrainian company under investigation for corruption – said it's "a good thing that no one's found anything wrong with his dealing with Ukraine except they say it sets a bad image."

Hunter Biden's receipt of more than $3 million from the natural gas firm Burisma Holdings while his father oversaw a U.S. effort to address corruption in Ukraine was a subject of the July 25 phone call at the center of the articles of impeachment against President Trump.

Trump mentioned to Ukraine President Volodymyr Zelensky in the call that Joe Biden openly boasted of threatening to withhold $1 billion in U.S. aid to Ukraine if then-Ukraine President Petro Poroshenko did not fire the country's general prosecutor, who was investigating Burisma at the time.

Democrats contend Trump's request that Zelensky assist Attorney General William Barr in looking into potential corruption in Hunter Biden's position amounts to digging up dirt on a political rival, insisting there was "no basis" for any investigation.

But the White House presented evidence last week in the Senate trial to bolster its argument that it was a legitimate matter of public interest. The president's lawyers argued, for one, that two witnesses called by the House Democrats testified that the Obama State Department expressed concern that the Biden arrangement was a conflict of interest.

Peter Schweizer, who exposed the Hunter Biden-Ukraine deal in his 2018 book "Secret Empires," said in an interview last week with SiriusXMs Breitbart News Daily that the key to understanding the matter is the timing.

"The timing is clear: February of 2014, Putin moves into Crimea, that creates this whole crisis," he said. "In March of 2014, Joe is point person on Ukraine policy. Within three weeks, Ukrainians suddenly decide, 'Hey Hunter Biden is the guy, the expert, we want to join this company. And yeah, we need to pay him a million dollars a year.'

His new book, "Profiles in Corruption: Abuse of Power by America’s Progressive Elite," presents evidence that five members of Biden's family profited from his position as vice president of the United States.