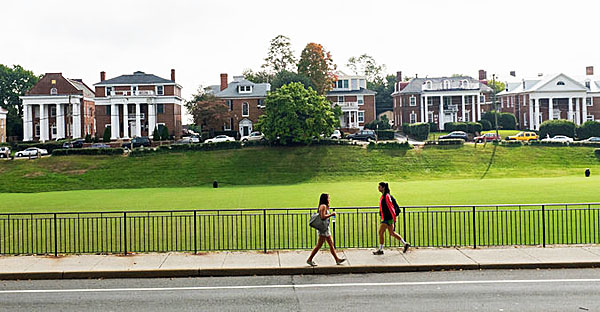 A student at the University of Virginia, which includes a multicultural center, has told whites to leave the facility because she just feels "uncomfortable."

The stunning attitude, and comments, were captured on video:

Student at University of Virginia to other students in the Multicultural Center:

“Public service announcement! Frankly, there is just too many white people in here... It does make some of us PoCs uncomfortable.”

This is literally racist. pic.twitter.com/AoARgqwYqb

A social media commenter who found and posted the video noted that the student posted, "Public service announcement! … Frankly, there is just too many white people in here … It does make some of us PoCs (people of color) uncomfortable."

A Gateway Pundit commentary noted it was "a racist black student" who was demanding that "white people leave the newly opened Multicultural Student Center at University of Virginia."

The report continued, "The entitled student stood up and announced to her peers that white students using the space made her and other people of color uncomfortable."

Said the student, "There's a whole university for a lot of you all to be at, and there's very few spaces for us, so keep that in mind."

"The website for the Multicultural Center," wrote Gateway Pundit, "which just opened on February 6, says that it is meant to 'promote inclusion and engagement for historically underrepresented students. We enhance the undergraduate experience through co-curricular programs and culturally relevant services that are meant to empower students in their identity, build community, and help a diverse group of students find their individual and collective voices.'

"Apparently 'diversity' means targeting and excluding white students, to some, despite the website stating that 'these Centers are open to everyone, regardless of race, ethnicity, religion, ability, ethnic or national origin, sexual orientation or gender identity.'"

On Twitter, the posting with the video was followed but a long list of comments that were less than tolerant of her announcement.

"Hutch" wrote, "If she is so uncomfortable. She is free to leave."

"Some POC's do a real good job of keeping racism alive and well," said Mike Deneut.

Brad Crockett said, "Clearly some of these students didn't understand that 'multicultural' meant 'no white people.'"

"Lisaroselee" added, "She also has access to the entire campus and is free to go anywhere she wants to go."

CIA claims briefing President Trump 'most difficult' in decades, but …