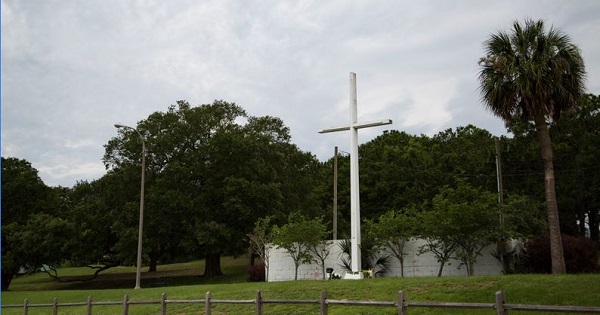 A historic World War II-era memorial cross will be allowed to remain in a park in Pensacola, Florida, after the 1th U.S. Circuit Court of Appeals followed U.S. Supreme Court precedent on the issue and concluded that removing it would "strike many as aggressively hostile to religion."

At issue was the Bayview Cross, one of more than "170 displays in Pensacola parks memorializing the city's diverse history and culture," according to officials with Becket, who fought in court on behalf of the cross.

The cross was built in 1941, as the U.S. prepared to enter WWII, as a place for the community to unite. Since then, "Pensacola citizens have held community events such as Easter sunrise services, Veteran's Day and Memorial Day remembrances, and other voluntary gatherings at the monument, which has become a significant symbol for the Pensacola community," Becket explained.

But four "Pensacola residents," including three who don't live in the city, and two of those don't even live in the United States, and the last who used the cross for his own "satanic purposes," complained.

Originally, the same court said the cross would have to be destroyed.

But it was given a second opportunity to decide the case after the U.S. Supreme Court, in the American Legion v. American Humanist Association case involving a World War I memorial cross in Bladensburg, Maryland, said that cross could stay.

"The Supreme Court has now made clear that religious symbols are an important part of our nation's history and culture,” said Luke Goodrich, vice president and senior counsel at Becket.

"Pensacola is a historic city with a rich and diverse history. The Bayview Cross is an important part of that history as a symbol of our community’s coming together during a national crisis," said Grover C. Robinson IV, mayor of Pensacola. "Today the citizens of Pensacola will celebrate our long-awaited victory and the preservation of the Bayview Cross."

The American Humanist Association, on behalf of the four "residents," sued the city in 2016, and the following year, a district court judge ruled the structure violated the Constitution.

Becket, in fact, had argued the case should not even have been filed.

The appeals court said, "Having reconsidered this case in light of American Legion, we concluded (1) that the Supreme Court's decision abrogates Rabun's analysis and holding with respect to the merits of the Establishment Clause claim there and (2) that when American Legion (rather than Rabun) is applied, Pensacola's maintenance of the Bayview Park does not violate the First Amendment."

The opinion continued, "'Established' religious monuments and displays are entitled to a formal 'presumption of constitutionality.'"

And it said, "Having reconsidered the case in light of American Legion, we conclude, as the Supreme Court did there, that 'the cross does not offend the Constitution."

A special concurrence also was written by court members that ridiculed the concept that someone would demand a cross be removed because they are "offended" or "affronted."

Those people, the concurrence explained, did nothing "to take any affirmative steps to avoid the cross."