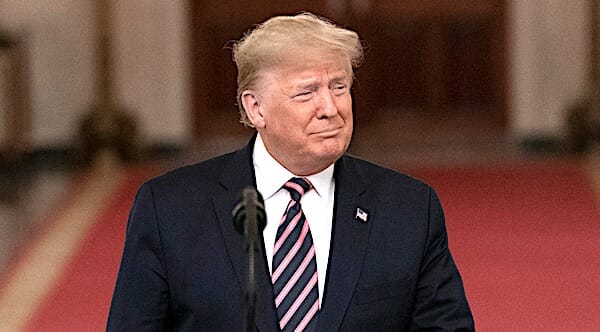 President Trump delivered a widely acclaimed State of the Union address before being acquitted in the Senate; the Iowa caucuses turned catastrophic for Democrats; and a jobs report came out Friday affirming Trump policies behind the economic boom.

Then the week got worse for Democrats, who were handed a huge loss in court Friday.

The D.C. Circuit Court of Appeals ruled in a unanimous decision that Democrats in Congress have no standing to sue the president over the emoluments clause, and the case must be thrown out.

The Democrats were accusing the president of illegally profiting off his private businesses while in office, the Hill said.

But the three-judge panel said the argument isn't appropriate in the courts.

"Members can, and likely will, continue to use their weighty voices to make their case to the American people, their colleagues in the Congress and the president himself, all of whom are free to engage that argument as they see fit," the judges wrote. "But we will not — indeed we cannot —participate in this debate."

The Hill called it a "major win for Trump."

The president did not place his business assets in a blind trust when he was elected, as some presidents have done.

The emoluments claims date back to 2017 when some 200 Democrats in the Senate and House – the same ones to supported the failed impeachment agenda – claimed that Trump's business holdings violated the Constitution's Foreign Emoluments Clause.

The clause bans officials from receiving gifts from foreign countries.

Democrats claimed that foreign diplomats' use of Trump hotel chain facilities opened him up to foreign influence.

The Hill said, "The unanimous D.C. Circuit panel said in its decision that the members lacked standing because they did not comprise a majority of either the Senate or House when they filed the lawsuit and therefore did not represent either chamber."

It's not the only such claim from Democrats, the Hill reported. A separate case is pending before the 4th U.S. Circuit Court of Appeals. The case was brought by several attorneys general. Yet another case brought by a special interest group also was pending in Washington.

The opinion noted, "When members of Congress sue the president in federal court over official action, a court must first determine whether the dispute is a 'case' or 'controversy' under Article III of the United States Constitution, rather than a political dispute between the elected branches ... we conclude that the members lack standing."

The ruling said that because the members of Congress lacked standing, it the court would not address the merits of the case.

The high court's precedent is that individual members of Congress cannot claim to assert representation of the entire House or Senate.

"Our conclusion is straightforward because the members – 29 senators and 186 members of the House of Representatives – do not constitute a majority of either body and are, therefore, powerless to approve or deny the president's acceptance of foreign emoluments."