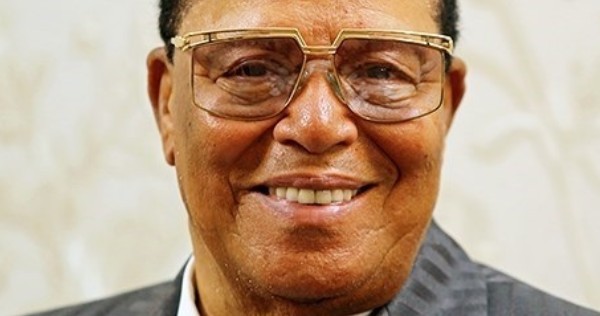 "You know America is going to go to war. They killed Qassem Soleimani, and America is so powerful she has the right to define others," Farrkhan said at the conference Sunday in Detroit, according to the Middle East Media Research Institute, or MEMRI.

Farrakhan said he thought he had met Soleimani, the commander of the Iranian Revolutionary Guard Quds Force.

Farrahkan said Soleimani was no terrorist but rather a "brother from Iran" who was helping people rid themselves of an occupying army.

Farrakhan recounted telling Iran's supreme leader, Ayatollah Ali Khamenei, that he represents the Mahdi, the coming Islamic messiah according to the theology of Iran's mullahs.

The Nation of Islam leader said America is falling because it has become "the habitation of devils, the hole for every foul person, a cage for every hateful bird."

He shouted at President Trump: "Have you become a nation of devils?"

He then quoted from the Ten Commandments: "You shall not commit murder," referring to the killing of Soleimani.

"Murder is your modus operandi ... you want me dead and after today you might want to speed it up."

MEMRI noted that several mayors of Michigan towns attended the event as well as the chief of staff of Detroit City Council President Brenda Jones.

Jones read a message of support to the Nation of Islam on stage.

Farrakhan said he was "inviting" Trump "to sit down and talk because I have a message for you from God."

"In fact, I'll give it to you today," he said. "Let me tell you something brothers, the Quran asks a question – Do you wonder that a man born from among you has been selected by God, to be a messenger of His to the people, and a warner to the world and the nations? Yeah, that's who I am. You may know me as Louis Farrakhan. I didn't know what I was going to become as a student of Elijah Mohammed. But I'd like to tell you what my assignment is.

Farrakhan said Soleimani "was no terrorist."

"Now I'm naming you, and I got weight with God. An occupying army. What are you doing in the Middle East? Soldiers everywhere, who sent for them? Protecting your little flunky nations? So now if I speak like I speak, and you know I'm telling the truth, this is not