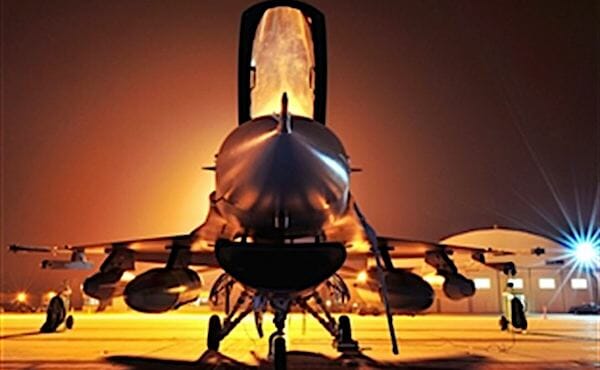 An F-16 fighter jet stands ready for departure early in the morning on Truax Field in Madison, Wisconsion, Sept. 22, 2009.

The chaplain corps for the U.S. military dates back to 1775.

That's shortly after George Washington recognized "that spiritual fortitude is just as important as physical strength" and he asked the Continental Congress to have chaplains in each regiment.

But now, those chaplains are under attack for even mentioning the name of the most important figure in their faith.

The situation has been described by officials with First Liberty, who are fighting on behalf of Cmdr. Richard Smothers, a chaplain at Naval Station Newport in Rhode Island.

Which triggered officials with the Military Religious Freedom Foundation.

They demanded the base commander, Ian Johnson, investigation Smothers and "anyone else who promoted the event with flyers or emails," according to First Liberty.

"Last time we checked, a military chaplain's primary function is to provide religious services and counseling, which inevitably means informing fellow service members of updates regarding faith-related seminars for which attendance is voluntary. However, it seems like the MRFF has invented a 'mythical' version of the Constitution where chaplains are in violation of the law for…doing their job," the Institute reported.

The report noted Washington's desire for chaplains for American soldiers, and how chaplains ever since have served in every American war.

"Throughout American history, over 400 military chaplains have died in war, sacrificing their lives for their troops, many of them receiving recognition for their valor," the institute report.

First Liberty explained, "Encouraging troops through faith is a chaplain’s job. How can a chaplain perform his duties if he can’t even mention his religion’s most important figure?"

The report explained that chaplains are endorsed by a particular church or organization, whether Christian, Jewish or Muslim, and they agree to uphold those beliefs.

"If they don’t, they lose their endorsement," the report said. "That’s why it’s so absurd when chaplains are attacked for sharing certain aspects of their faith—like a Christian chaplain giving a seminar about Jesus. It goes against their very job description."

All ended up exonerated.

The institute said, "The All Out war on religious expression isn’t just limited to the military. People of faith in the public square are coming under fire on a regular basis. Not long ago, activists called for the U.S. inspector general to investigate Secretary of State Mike Pompeo because he mentioned how his Christian faith informed his leadership style."