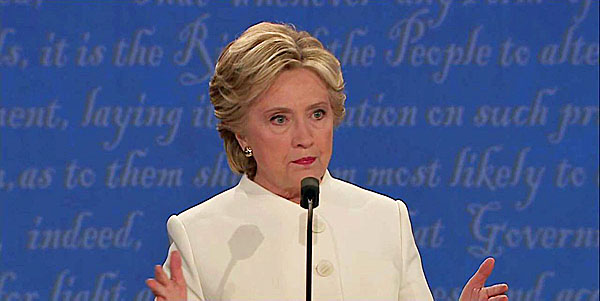 She's a former secretary of state, a former first lady, a former nominee for president, and those who watch politics still watch what she says.

And Hillary Clinton says she would even support Bernie Sanders in the 2020 presidential race if he's the Democrat Party's nominee.

Clinton has, of course, unleashed unprecedented criticism of Sanders, who was her failed opponent in the 2016 race for the Democratic nomination for president, a race in which she also became a two-time loser in the race for the Oval Office.

But a report from ABC revealed her position now is, "I'm going to wait and see who we nominate. I will support the nominee, and it won't surprise you to hear me say that I think that it's imperative that we retire the incumbent."

The report explained, "Clinton, who beat Sanders for the Democratic nomination only to lose the 2016 election to President Donald Trump, made waves with comments about Sanders in the new documentary 'Hillary' saying 'nobody likes him, nobody wants to work with him.'"

CNN reported recently that Clinton's criticism of Sanders was unrelenting.

She was asked on a television show about her perspective on Sanders. She replied: "I have a pretty clear perspective about what it's going to take to win, and as I said earlier, that's what I think the key calculation for any voter has to be. You've got to be responsible for what you say, and what you say you're going to do. We need to rebuild trust in our fellow Americans and in our institutions, and if you promise the moon and you can't deliver the moon, then that's going to be one more indicator of how, you know, we just can't trust each other."

Earlier, her opinion was clear, when she said: "He was in Congress for years. He had one senator support him. Nobody likes him, nobody wants to work with him, he got nothing done."

She's called him "a career politician."

"It's all just baloney and I feel so bad that people got sucked into it," she said.

She also has complained that Sanders was "slow" to endorse her when she was the Democratic nominee in 2016.

"I hope he doesn't do it again to whoever gets the nomination. Once is enough."