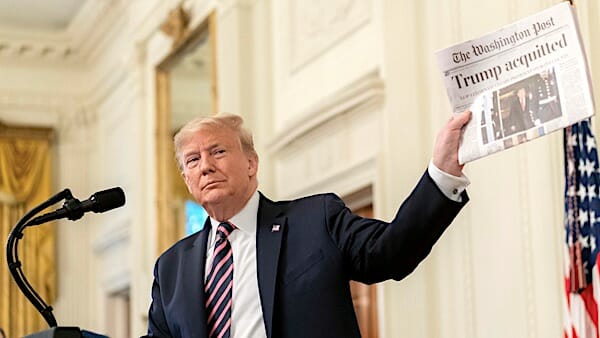 President Donald J. Trump shows a newspaper headline during his address Thursday, Feb. 6, 2020 in the East Room of the White House, in response to being acquitted in the U.S. Senate impeachment irial. (Official White House photo by D. Myles Cullen)

[Editor's note: This story originally was published by RealClearInvestigations.]

After a November impeachment hearing, Democratic Rep. Peter Welch of Vermont formed a press gaggle in the Capitol to discuss President Trump's asking Ukraine about the Bidens' dealings there.

A curious reporter asked: "Have any of the witnesses been able to talk about what Trump's actual motivations were?" The normally eloquent Vermonter sputtered and stammered as he tried to formulate an answer.

In other words, the 17 witnesses deposed by Democrats did not confirm such a corrupt personal motive. Some offered opinions, but their opinions were no more conclusive than those of Welch or other Democrats — including the "whistleblower" who lit the impeachment fuse.

Democrats lionize the whistleblower as a "hero" — reportedly he's CIA analyst Eric Ciaramella, who formally advised Vice President Joe Biden. But they have him to blame for their failed effort to marshal a bipartisan impeachment, to say nothing of convicting the president and removing him from office.

After all, they built their case largely on the whistleblower's opinion — which he gathered from the opinion of a colleague in the White House — that Trump "sought to pressure the Ukrainian leader to take actions to help the president's 2020 reelection bid." He stated this as fact in the Aug. 12 complaint he filed under whistleblower protections.

But it was based on a conversation he had with his White House source, Lt. Col Alexander Vindman, who didn't know Trump's intentions any more than the whistleblower did.

"In the [White House] official's view," the whistleblower wrote in a July 26 memo, "the president had clearly committed a criminal act by urging a foreign power to investigate a U.S. person for the purposes of advancing his own reelection bid in 2020."

Convinced or not, it was still just his "view." A presumption without proof. But the whistleblower adopted it as gospel in his complaint. And Democrats, in turn, adopted this same presumption as the foundation for their indictment against the president. It is incorporated in their first article of impeachment, which alleges the president "solicited the interference of Ukraine in the 2020 election" in a way that would "influence the election to his advantage."

Thus the impeachment was built on what an anonymous whistleblower presumed to be true about Trump, which he gathered from what his friend presumed to be true about Trump. It wasn't even second-hand information. It was second-hand opinion. So the first and most important article — "abuse of power" — was merely Democrats' speculation built upon Ciaramella's speculation built upon Vindman's speculation.

This is where the case for impeachment broke down. Not just in the Senate. Or the House. But from its origins in the so-called whistleblower's complaint.

In spite of the leap the whistleblower made in assuming Trump had corrupt personal motives, the record of the July 25 call between Trump and Ukraine's president shows the two leaders never talked about 2020.

The transcript contains no reference to Trump's reelection bid. Nowhere does Trump even hint that his motive for the request was the presidential race. And a parade of diplomats, White House officials and other witnesses offered no firsthand information to substantiate the notion that 2020 was on Trump's mind.

More than 100 hours of deposition testimony from 17 witnesses and dozens of subpoenas for documents produced no evidence to corroborate the whistleblower's core allegation. And the more than 30 hours of public hearings that followed were no more dispositive.

Motive was a major hole in the case from its genesis at the whistleblower's desk at Langley.

In prosecuting crimes, showing motive is often essential to winning convictions. In the impeachment of Trump, Democratic prosecutors failed not only to charge a crime, but they could not even prove that the president had a corrupt intent for allegedly abusing his power in asking Ukraine's leader for help investigating the Bidens. They got no further than the whistleblower's original conjecture.

To be sure, they never missed an opportunity to claim he did it to damage his political rival and "cheat" his way to victory in the 2020 election. And while that might sound plausible to some, it was not provable. They offered no documentary or testimonial evidence to actually substantiate that, despite U.S. lawmakers' pleas for proof throughout the impeachment inquiry and trial.

In a Nov. 19 hearing, Rep. Will Hurd, R-Texas, asked two witnesses: "Did you overhear any conversations about how potential information collected by Ukraine on the Bidens would be used for political gain?"

Former U.S. Special Envoy for Ukraine Kurt Volker: "No, I did not."

The next day, Hurd, a vocal Trump critic, posed the same question to then-U.S. Ambassador to the European Union Gordon Sondland, and got the same answer: "Did I personally hear that? No."

On the contrary, some of these same witnesses called by Democrats testified that Trump solicited Ukraine for legitimate purposes, such as cracking down on corruption — though prosecutors buried those parts of their testimony, inconvenient as they were to their case, and the major Washington media overlooked them.

Witnesses noted that it was plausible Trump suspended U.S. aid to Ukraine because he didn't want taxpayer money ending up in the hands of crooked oligarchs, such as the founder of the gas conglomerate that paid Biden's son Hunter millions of dollars for sitting on its board.

"Whether Ukrainians within the company of Burisma had acted in a corrupt way or sought to buy influence, that's a legitimate thing for Ukraine to investigate," Volker testified.

Asked specifically about investigating Biden, he replied, "I don't think anyone should be above the law."

Deputy Assistant Secretary of State George Kent testified that while serving in Kiev in February 2015, he raised concerns directly to former Vice President Biden's office that his son's Burisma role "could create the perception of a conflict of interest."

Even witnesses openly hostile to Trump conceded that the president may have had solid grounds for asking Ukraine to cooperate in probing the potential conflict. Former NSC official Fiona Hill testified it was "not actually completely ridiculous" for Kiev to investigate the allegations of Burisma-Biden corruption.

Vindman, the whistleblower's White House source (whom the acquitted President removed from his NSC post last week), admitted he didn't know for sure what Trump's motive was for asking Ukraine to "look into" the Biden's dealings — and he listened in on the entire call.

"I guess I — I don't know what was in the president's mind and if that was the intent," Vindman testified.

Ironically, Democrats complain Trump was acquitted only because the Senate trial was "rigged" to exclude their witnesses. But Trump's defense team surely would have used these witnesses' prior statements to further weaken the Democrats' case, which, borrowing from the whistleblower's unsupported claim, posited that Trump pressured Ukraine for "his personal political gain" in an effort to "corrupt" the 2020 election.

House managers' impeachment case bombed in the Senate because they never even came close to proving the corrupt personal motive originally alleged by the still-protected whistleblower who sparked this whole firestorm.

In the end, the majority of the Senate simply didn't buy it. Even the lone Republican defector — Mitt Romney — could cite no evidence that Trump acted with the corrupt intent required for proving Article I's "abuse of power."

In voting to convict and remove the president from office on that single count, the Utah senator could only infer that the president was motivated by corrupt personal interests when he asked Ukraine's leader to "look into" reports Biden forced Kiev to fire a prosecutor investigating his son.

"The president's insistence that they be investigated by the Ukrainians is hard to explain other than as a political pursuit," Romney speculated in a floor speech explaining his vote.

After listening to Democratic prosecutors make their case for two weeks, Romney was still left to guess about the president's intent. Absent direct evidence, he simply imputed sinister motives. Fifty-two other senators, in contrast, found Trump not guilty.

This story originally was published by RealClearInvestigations.