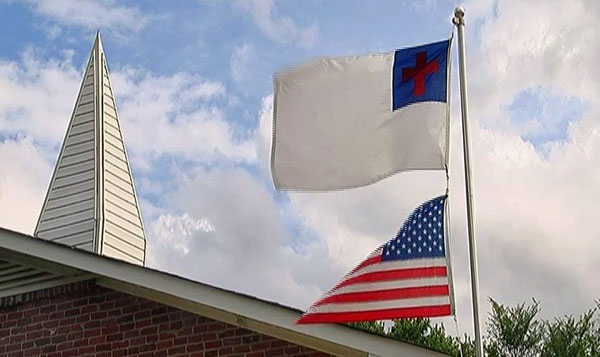 A lawsuit over flying a Christian flag at a "public forum" in Boston is being appealed after a federal judge ruled the city hall flagpole can promote communist China, communist Cuba, the LGBTQ agenda and other causes but not Christianity.

Liberty Counsel filed a notice of appeal after Judge Denise Casper found that the city created a new rule to prevent a Christian flag from flying on the flagpole.

The judge insisted there was no evidence the city had any "improper preference for non-religion over religion."

"The city did not alter its procedures for review of flag applications because of Camp Constitution's request," she claimed.

The dispute is over a request by the non-profit group Camp Constitution to fly a Christian flag -- white with a blue segment that contains a red image of a cross -- on the city flagpole, which routinely is made available to a variety of private groups and causes.

The city refused, the camp sued, and now the case is heading to the 1st Circuit Court of Appeals.

Liberty Counsel said that after "the close of discovery, the undisputed facts agreed to by the city show Boston has allowed nearly 300 flag raisings by private organizations on the city hall flagpole, which the city designated as a public forum for private speech."

"The city refers to its flagpole as a 'public forum' and allows private organizations to temporarily raise their own flags on the flagpoles. However, the city censored the religious viewpoint of Camp Constitution's flag, which was to be raised for about an hour while Camp Constitution supporters gathered below the flag to celebrate Constitution Week. The flag was part of the ceremony to honor the Constitution and recognize the Christian Founders," the legal team said.

"There is a crucial difference between government endorsement of religion and private speech, which government is bound to respect. Censoring religious viewpoints in a public forum where secular viewpoints are permitted is unconstitutional," he said.

Hal Shurtleff and Camp Constitution first asked the city in 2017 for a permit to raise the Christian flag on Boston City Hall flagpoles. The purpose was to commemorate Constitution Day, Sept. 17, and the civic and cultural contributions of the Christian community to the city of Boston, the commonwealth of Massachusetts, religious tolerance, the rule of law and the U.S. Constitution.

Casper concluded the city can allow other private flags but can single out the Christian flag.

That's even though the city's permit guidelines promised "to accommodate all applicants seeking to take advantage of the city of Boston's public forums."

The judge admitted that the city had never denied a flag-raising request prior to Camp Constitution's request.

It reviewed the matter and found the city "had no past practice of flying a religious flag," although religion certainly played a role in the themes of other flags that had been raised.

Boston officials claimed it was the city's policy "to refrain respectfully from flying non-secular flags on the poles in accordance with the First Amendment's prohibition of government establishment of religion."

Officials then wrote rules stating that "at no time will the city of Boston display flags deemed to be inappropriate or offensive in nature or those supporting discrimination, prejudice, or religious movements."

It did not explain, nor did the judge address, whether or not promotion of the LGTBQ agenda or communist China would be offensive to some.

City officials claimed discrimination against Christianity was justified because they wanted "to create an environment in the city where everyone feels included, and is treated with respect."