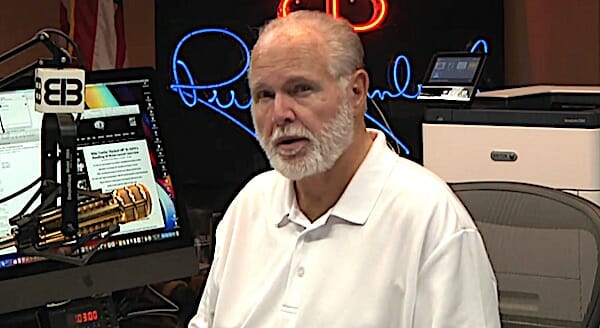 The headlines on Monday once again were filled with the coronavirus.

There were reports the outbreak could cause the Tokyo Olympics to be moved, thousands are lining up to buy face masks and cases in Italy skyrocketed as buying panics hit certain areas, leaving store shelves empty.

And the New York Stock Exchange was down by roughly 3% for a time.

But the truth is, contends talk-radio host Rush Limbaugh, that the coronavirus "is the common cold."

It is being "weaponized as yet another element to bring down Donald Trump," he said.

"The Drive-By Media hype of this thing as a pandemic, as the Andromeda strain, as, 'Oh, my God. If you get it, you're dead,' do you know what the — I think the survival rate is 98%," he said.

"Ninety-eight percent of people get the coronavirus survive. It's a respiratory system virus. It probably is a ChiCom laboratory experiment that is in the process of being weaponized. All superpower nations weaponize bioweapons. They experiment with them. The Russians, for example, have weaponized fentanyl," he said.

A 2% fatality rate likely is actually "less than the flu, folks," he said. In fact, WebMD reports recent annual flu fatality tolls have ranged up to 49,000. The CDC's estimate is higher, blaming the flu for up to 61,000 deaths annually, The National Institutes of Health cited a World Health Organization estimate that there could be as many as 650,000 flu deaths annually around the world. Coronavirus so far is being blamed for a little over 2,000 deaths.

"Do not misunderstand. I’m not trying to get you to let your guard down," he said. But "we're not talking about something here that’s gonna wipe out your town or your city if it finds its way there. This is a classic illustration of how media coverage works. Even if this media coverage isn't stacked, even if this is just the way media normally does things, this is a hyped, panic-filled version. It's exactly how the media deals with these things to create audience, readership, interest, clicks, what have you."

He said the media's goal is to attack Trump.

But it won't work, said Limbaugh.

"It's one of the latest in a long line of efforts that the Drive-By Media's making to somehow say that Trump and capitalism are destroying America and destroying the world. Just keep in mind where the coronavirus came from. It came from a country that Bernie Sanders wants to turn the United States into a mirror image of: Communist China. That's where it came from. It didn't come from an American lab. It didn't escape from an American research lab. It hasn't been spread by Americans. It starts out in a communist country. Its tentacles spread all across the world in numbers that are not big and not huge, but they're being reported as just the opposite."

He said, "Just trying to keep it all in perspective."