Normal Americans of sound mind and morals are being forced to confront a bizarre but inescapable truth about their nation’s leadership: The Democratic Party has become essentially a gargantuan web of lies and liars – and little else.

There’s no need to prove this. It’s utterly self-evident – from the Democrats’ pretend “prayerful” impeachment of President Trump, to their earlier pretend “Trump-Russia collusion” crisis, to their pretend distress over “rampant racism and white supremacism” in the world’s least racist nation, to their pretend terror that global warming will soon render the world uninhabitable, to their dozens of pretend new “gender identities,” to their pretend concern for “women’s reproductive rights” when abortion is based entirely on lying to women and killing their babies.

It’s difficult for normal people, restrained by a functioning conscience, to comprehend how politicians like Adam Schiff and Elizabeth Warren and Nancy Pelosi can look into a TV camera – which is to say, look right into the eyes of millions of people – and flat-out lie continually.

This total divorce from honesty and truth, which has captured today’s Democratic Party, is explored in a powerfully eye-opening and original way in the latest issue (January 2020) of WND’s acclaimed Whistleblower magazine – headlined “IN LOVE WITH LYING: For today’s enraged, power-obsessed Democrats, deception is a creative force.” 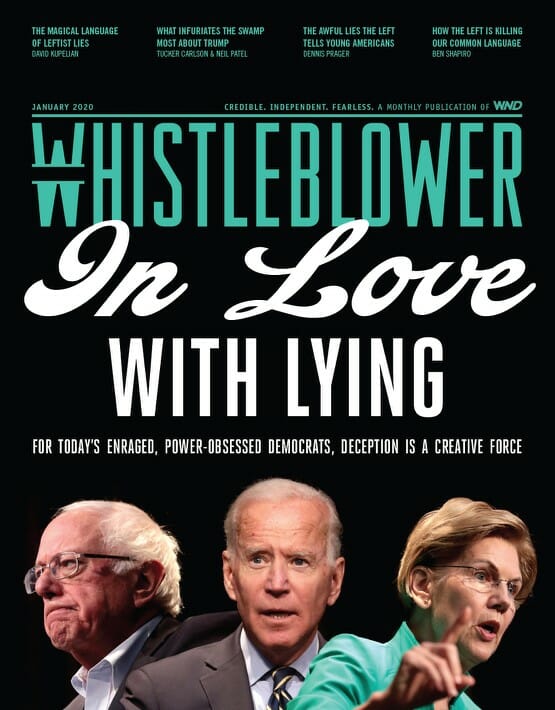 When conservatives attempt to explain the left’s shockingly wanton disregard for truth, they often say things like, “These people are captive to a toxic ideology” or “They’re obsessed with power” or “They’re playing to their radical leftwing base” or “They suffer from Trump Derangement Syndrome.”

All true, says Whistleblower Editor David Kupelian, “but the ultimate reason the left is so comfortable with lying – as with so many truly big issues in life – has to do with God. Do we honor and submit to the Creator of the Universe and His laws of life, or do we rebel against Him so that we can be, in effect, our own gods?”

At core, explains “IN LOVE WITH LYING,” today’s radical left is at war. At war with God, with the Judeo-Christian values and principles underlying Western civilization, with biblical sexual morality, with the Ten Commandments, indeed with most everything that has allowed America to become so uniquely successful in terms of both prosperity and freedom.

“Consider what happens when you’re at war with God,” says Kupelian. “You play god. You become – in your mind – the sole arbiter of truth, of right and wrong, of justice and injustice. Thus, lying becomes, quite literally, a creative force for the left, a tool for the fundamental transformation of society. For lying politicians, lies are magic words, the invocation of which represents the exercise of real power – power to impress voters, raise money, demonize critics, win elections, pass legislation, excuse failures, and transform a nation.”

Highlights of “IN LOVE WITH LYING” include:

“Lying is not something power-mad politicians do just for the usual reasons people sometimes lie,” says Kupelian, “like evading guilt or impressing others. For deranged politicians addicted to power, lying is a form of creation, the magical conjuring of an entirely new reality that has never before existed. Through lying, they are speaking into existence a new and, as they suppose, far superior reality.”

“IN LOVE WITH LYING” features some of today’s best and brightest minds, from Tucker Carlson and Ben Shapiro to Franklin Graham and Dennis Prager, and showcases like never before the Democratic Party’s passionate love affair with lies and liars.

First, you’ll get the acclaimed hardcover book on the Trump Revolution, "American Greatness: How Conservatism, Inc. Missed the 2016 Election and What the D.C. Establishment Needs to Learn" by Chris Buskirk and Seth Leibsohn.

How is it possible that the conservative elite, Washington insiders and mainstream media were all so completely out of touch with reality during the 2016 presidential election cycle? Today, a few months before the 2020 election, little has changed.

“We were all wrong!" "The greatest political upset in our lifetime." "None of us saw this coming." Those are just a few of the confessions pundits, experts and anchors expressed when it emerged that Donald J. Trump was the winner in 2016. Yet, while most of the political establishment and pundits missed the boat, there were many who recognized the growing Trump phenomenon in early spring 2016. And there were some who recognized, even during every seeming Trump-created "meltdown" or "mistake," that Donald Trump not only could win, but would win.

What did they see that others didn't? More importantly, how could so many "experts" and "smart people" get the election so totally wrong? And why are they still considered experts to this day?

"American Greatness" is an analysis and indictment of the mainstream media, liberal commentariat and conservative establishment that implicitly undermined, if not insulted, over 60 million fellow Americans when they treated Donald Trump's candidacy as a sideshow. With so little humility or self-reflection – and still no apology! – how can these so-called experts continue reporting on and analyzing a country and polity they have essentially admitted they do not understand? After all, what they got wrong in 2016 was not just an election. What they got wrong was America.

"American Greatness" is not just another analysis of the mainstream media’s liberal biases. It focuses equally on the many conservative writers, thinkers and pundits who have profoundly missed the mark as well. "American Greatness" explains how the timing was perfect for a populist takeover, why both the Left and the Right missed the pulse of the nation, and, most important, how we can move forward to truly make America great again. Special bonus! In addition, when you subscribe, renew or give a gift Whistleblower subscription today, you’ll also get the terrific, must-see, inspirational movie "Every Boy Needs a Hero," from the makers of the blockbuster Christian film "Alone Yet Not Alone."

"'Hero' is an excellent movie about God turning a man’s heart to his son and a son learning to forgive his father. The opening is powerful. The ending is heartrending. The drama, the acting, the jeopardy work well throughout the whole movie. This is one of the few movies that Movieguide can actually say GO SEE IT." – Dr. Ted Baehr, founder of Movieguide

If you prefer, you may order a single copy of the January 2020 issue, "IN LOVE WITH LYING." Or GET THE DIGITAL VERSION HERE!