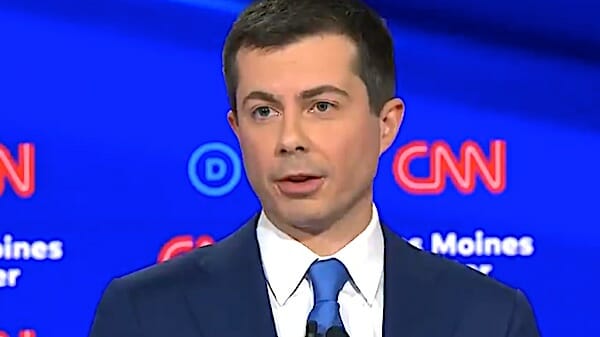 Radio giant Rush Limbaugh says it's not complicated why the mainstream media have gone over the edge because he mentioned on air that Democrat presidential primary hopeful Pete Buttigieg is gay.

It's because although those who follow politics knew of Buttigieg's homosexuality and same-sex marriage, many ordinary voters perhaps didn't know.

But they do now.

Limbaugh talked on Monday about the assault he's endured because of his comments about Buttigieg a couple days ago.

He had been discussing the Democrat hopefuls, wondering whether the party could win with Sen. Amy Klobuchar, or avowed socialist Bernie Sanders, or others.

It wasn't long, Fox News reported, before Buttigieg lashed out at Limbaugh for "lecturing" him.

According to Fox, "Buttigieg said on Sunday that he is proud of his marriage and his husband following comments from Limbaugh about whether voters would elect him because he's been 'kissing his husband' on stage after debates."

And Buttigieg said, "I'm not going to be lectured on family values from the likes of Rush Limbaugh or anybody who supports Donald J. Trump as the moral as well as political leader of the United States. America has moved on and we should have politics of belonging that welcomes everybody."

Limbaugh responded on Monday. "I had no idea this thing had even bubbled up. You know, I'm up doing the medical thing that I have to do here, and I wasn't even aware of this. So here's what I think's going on. Then I became aware of it, and Kathryn said, 'Oh, yeah, they're all over you. It's the usual thing. They're saying you said things you didn't say. All you had to do, Rush, was mention somebody is gay and here they come: You're a homophobe,' and that's exactly what this is," he said.

"I think that's what they're really mad about, that I even mentioned it. You're not supposed to mention it. Why aren't you supposed to mention it? Well, you answer that yourself. I mean, the Drive-Bys – as I've read what they've said and as I've replayed it (I've got transcripts of audio sound bites, montages) — they even seem to be afraid that I might have revealed that news to a lot of low-information voters for the first time," he continued.

"And all I happened to say was, 'If you're in the Democrat Party today and these are your three options based on the returns from Iowa and New Hampshire, how are you feeling about this?' I went through the whole thing from the perspective of Democrat powerbrokers. So I mentioned that Mayor Pete is gay, and, bam! That's all it took, and here comes, 'Limbaugh's a racist, bigot, sexist, homophobe! Decades and decades of negative comments, besmirching comments! Inhumane comments!"

He explained, about Buttigieg's outrage: "Well, I didn't lecture him on family values. I didn’t lecture anybody on family values, and they all know this. So now they’re gonna take these comments and they'll further distort these. You know, this is why I don’t like responding to this stuff. But I said, 'What the hell.' This is something that those of you who were listening know the truth and know how it was distorted. Those of you who weren't, who are now listening, deserve to have it known."

See one Iowa voter's reaction when told Buttigieg is married to a man: