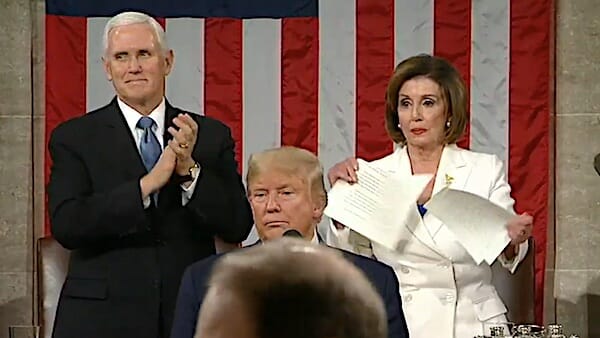 U.S. House Speaker Nancy Pelosi made it more than clear what she thinks of President Trump as she literally tore up the commander in chief's State of the Union address on national TV at the conclusion of his remarks Tuesday night.

When asked afterward why she shredded her copy of the speech, Pelosi responded, "Because it was the courteous thing to do, considering the alternatives."

"What we saw today was the manifestation of hatred," said Sen. Ted Cruz, R-Texas. "That hatred consumes any other sentiment they may have." President Trump delivers the 2020 State of the Union Address on Feb. 4, 2020 (video screenshot)

Analysts on the Fox News Channel weighed in on Pelosi's ripping up the speech in the aftermath of the event.

Sean Hannity called it "one of the most classless things ever to be done in the history of the State of the Union. ... I want to buy that [torn-up speech]. If anyone has it, I'll pay for it."

RELATED: 'America's future is blazing bright:' Full text of 2020 State of the Union

Dana Perino noted, "There were names of American citizens who have died in there."

Sara Carter explained: "What the Democrats did was stunning and disgraceful, and they're going to pay for it in 2020."

RELATED: Joseph Farah: Nothing better than listening to a Trump State of the Union

At the commencement of the evening, Pelosi offered to shake Trump's hand as he gave her the speech, but the president did not return his hand. It was unclear if he did not see her offer of a handshake.

Throughout the remainder of the address, Pelosi was restless, not paying attention and scanning the room, even raising her hand to make gestures to fellow Democrats. 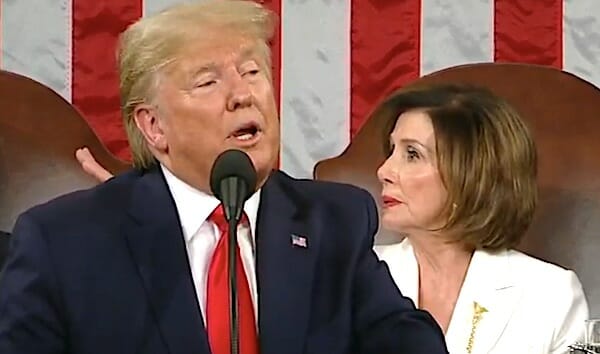 House Speaker Nancy Pelosi gestures behind President Donald Trump as he delivers his 2020 State of the Union address on Feb. 4, 2020 (Video Screenshot)

Regarding Pelosi's gestures, Perino speculated Pelosi might have been telling her colleagues on the left, "I told you, we should not have done impeachment."