Two days after House Speaker Nancy Pelosi ripped up a copy of President Donald Trump's State of the Union address, a Republican candidate running to challenge her in 2020 flew an aerial banner over San Francisco that read, "Pelosi for Prison."

DeAnna Lorraine said the response her campaign to represent California's 12th Congressional District, which encompasses parts of San Francisco, has received this week shows that many Americans can no longer identify with the Democrats' values.

"I have seen an incredible response to my campaign," she told The Western Journal, noting that she's seen an increase of nearly 30,000 social media followers this week.

Lorraine said she believes there is a direct correlation between the increase in support for her campaign and Trump's acquittal in the Senate Wednesday, as well as Pelosi's decision to tear up a copy the State of the Union address only seconds after Trump finished speaking on Tuesday night.

"I have seen an incredible amount of people just flocking to me and saying that this is their breaking point, and some people were quiet before -- they were quiet conservatives and they say, 'This is my breaking point to get out of the closet as a conservative,'" Lorraine continued.

Lorraine said she thinks Pelosi is "an enemy of the country."

"She has zero respect for Americans and for families and for veterans," she said.

Lorraine's campaign has set up a petition calling for Pelosi to be imprisoned for her "crimes against America."

On the website of the "Pelosi for Prison" petition, Lorraine accused Pelosi of using her power for personal gain and forsaking "American sovereignty with open borders policies."

Lorraine said she believes Pelosi should not only be held accountable for initiating the "sham" impeachment process, but also for abandoning those she was elected to represent in the process.

"What about her dereliction of duty?" she asked.

"San Francisco -- which has a homeless crisis -- and is being 100 percent ignored by this congresswoman," Lorraine said.

"As a national leader, Pelosi could use her spotlight, her voice, to shed a light upon this crisis and to California, but she's not brought it up."

On Thursday, Lorraine's campaign paid for a 25 x 80-foot banner emblazoned with the words "Pelosi For Prison" to fly over the city of San Francisco. 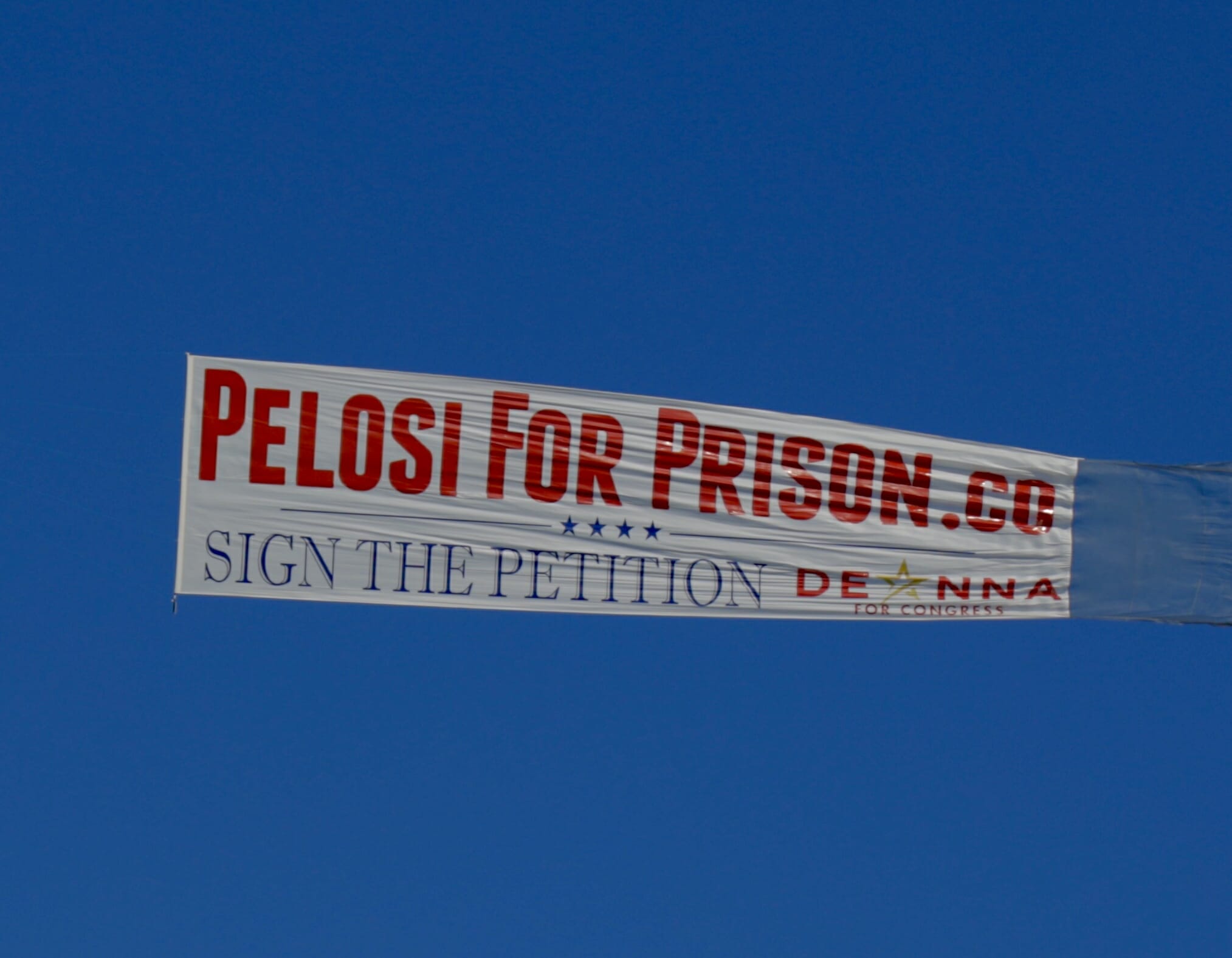 DeAnna Lorraine flew an aerial banner over San Francisco on Feb. 6 to call attention to what she believes are crimes against the American people. (Courtesy of DeAnna Lorraine)

The banner directed people to the "Pelosi for Prison" petition's website.

"I launched that banner yesterday as an attack on Nancy Pelosi and to call her out," Lorraine told The Western Journal on Friday.

"Trump finally got acquitted, again. He's exonerated, again, for crimes he didn't commit and I thought there's no better way than to start putting the spotlight on her -- the one that led this impeachment and the one that's actually behind all of these egregious, what I call, crimes against Americans."

"Yes, it's a bold move especially in Nancy Pelosi's very, very liberal district," she added, "but at the same time we need to be bold at this point. I'm tired of us being so polite."

Since the banner was flown across the city's sky, 11,000 people have visited the website, and over 2,500 people have signed the petition, Lorraine said.

Up close: Flying over San Fran as we speak! It’s raining Liberal Tears in SF right now#PelosiForPrison let’s get it trending🔥 pic.twitter.com/F7fKcaIES8

Where do I sign,
She said if Trump was removed she was stepping down,
With the help of Schiff they destroyed their party.
Both should be making license plates.
🇺🇸

"At what point do we start putting the spotlight on Nancy and the Democrats and their crimes?" she asked. "And at what point are we going to seek justice?"

The Western Journal reached out to Pelosi for comment, but has not yet received a response.