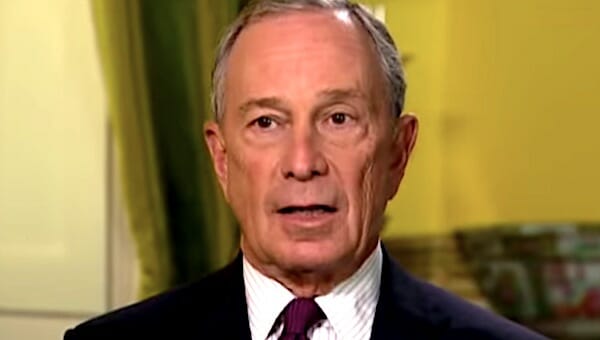 Bloomberg Philanthropies is among a handful of Bloomberg-affiliated nonprofits “making contributions for Mr. Bloomberg’s personal and political benefit,” Government Accountability and Oversight (GAO) noted in the complaint. GAO cited reports it says document a pattern of illegality.

GAO cited a Dec. 14 New York Times article titled “Mayors for Mike: How Bloomberg’s Money Built a 2020 Political Network,” which, among other things, lays out how city leaders who received grants from his foundation are tossing their support behind Bloomberg’s campaign.

Bloomberg’s foundation donated $500,000 to an education reform group based in Stockton, California, before Democratic Mayor Michael Tubbs endorsed Bloomberg’s campaign in December 2019. This shows that Bloomberg was laying out a network of support well before his announcement, GAO notes.

“Numerous media outlets have taken notice of the pattern of charitable grants followed by what are otherwise curious endorsements,” the complaint adds. “We suggest these considerations both should inform how the IRS views this unusually politically targeted largesse.”

“Don’t be fooled — these baseless allegations come from a deceptively named front group for climate change skeptics, at least some of whom have been funded by the coal lobby,” Bloomberg spokesman Stu Loeser said in a prepared statement to the Daily Caller News Foundation.

He added: “And we will soon be writing our own letter to the IRS asking them to investigate the obvious political activity occurring under the aegis of supposed 501c3.” The IRS has not yet provided a statement fleshing out whether or not it will begin an investigation.

Some critics believe Bloomberg uses Bloomberg Philanthropies as a type of pass-through entity through which donors can support elected officials with resources that legislatures will not provide and which donors cannot legally provide directly.
Bloomberg is devoting half a billion dollars to defeating President Donald Trump in 2020.

The group is also responsible for placing so-called special assistant attorneys general inside state attorneys general offices around the country by the State Energy and Environmental Impact Center, which received $6 million from Bloomberg in 2018.

Bloomberg’s grant was designed to escalate attacks against Trump’s regulatory rollbacks, as well as targeting coal companies. Documents appear to show Illinois, Maryland and other states involved in the program hired attorneys with ties to the billionaire, the DCNF reported in February 2019.