There comes a time in the evolution of the progressive agenda when true conservatives should stop using the "slippery slope" argument because the place we've degenerated to should be condemned as is. That's our situation today where the hero we're rallying behind to fight the progressive agenda has embraced one of its most insidious and destructive tenets. I'm talking about President Trump's appointment of open and unrepentant homosexual Richard Grenell to the position of acting director of national intelligence.

The insidious and destructive tenet of progressivism I'm referencing is "Sexual Orientation Theory" – a fake science invented by progressive political strategists for the purpose of normalizing LGBT lifestyles and de-normalizing the natural family. It has even less legitimacy than "climate change science."

Frankly, if Richard Grenell kept his sexual proclivities to himself and told people to mind their own business about his private life, I'd be more inclined to consider the "merit based" arguments for his nomination (though at first glance his resume falls far short of qualifying him for this position). But the minute he went public about his homosexual domestic partnership, he became a Marxist change agent, his very presence in public life an argument that a homosexual "orientation" is equivalent to normal sexuality. (Who in American history has ever wanted that goal? It wasn't the conservatives!)

When Grenell did that, he crossed the line from expecting reasonable tolerance from our genuinely magnanimous live-and-let-life society to demanding public acceptance. And in taking that step he also implicitly endorsed the progressive strategy of celebrating his "out" lifestyle as social progress, forcibly integrating it into society, and punishing those who object.

These are the "Five Stages of Gay Supremacy" I've been warning about for 30 years:

As a Trojan Horse in the conservative movement, Grenell might not openly advocate those goals himself, but that agenda serves his interests nonetheless. And of course, he won't be celebrated by the loons of the far, far left, because he takes a more conservative position on other issues than they will tolerate. But he will be, and is, being celebrated by "useful idiots" (Vladimir Lenin's term, not mine) in the conservative movement who have forgotten exactly what it was that conservatism is meant to conserve, and have moved steadily leftward in their thinking till they've passed John F. Kennedy and nearly all the liberals of the 1950s.

Conservatism didn't change – "conservatives" did, through a decades-long steady diet of leftist propaganda combined with a fear of bucking political correctness.

The willingness of conservatives to drift ever leftward from year to year is why I now call myself a constitutionalist. I now work to move the country rightward and reclaim the ground "conservatives" have surrendered. But I still work to wake up today's conservatives to the dangers of their slow-motion transformation into yesterday's liberals.

What conservatism is meant to conserve is the "ordered liberty" of the constitutional republic bequeathed to us by the Founders. The "order" of that liberty is the natural order of "Nature's God" (invoked in the Declaration of Independence), including but not limited to the natural family of one man and one woman united in life-long monogamous heterosexual marriage.

America was never a "theocracy," and I'm not advocating for one. Our political philosophy was always "Natural Law Based 'Secularism,'" meaning non-sectarian but Theistic, on the foundation of Genesis 1:1, a truth perpetually affirmed as our national motto, proudly emblazoned on all of our currency: "In God We Trust." It is also expressly confirmed as historic fact by the U.S. Supreme Court, not as a mere footnote, but a heavily documented 27 paragraph long legal treatise within the ruling.

Marxism is designed to destroy and replace every element of that natural order. No matter how conservative you think your fiscal policies may be, if you're adopting their way of thinking about sex and marriage, you're helping them destroy the republic. It's a package deal – there is no American republic without a marriage-based family-centered mainstream, and that is why the Marxists' primary weapon to take us down has been the "sexual revolution."

The reason we MAGA Deplorables are all cheering Donald Trump is because he represents the possibility of pushing back the Marxist agenda. But the people who created the crisis of civilization we want him fix are the exact same people who invented "Sexual Orientation Theory" and created the LGBT movement.

Deplorables, don't you realize where Hillary Clinton was and to whom she was speaking when she called us that? It was the 2016 "LGBT for Hillary Gala" (a fact totally suppressed in most media reports the next day). All you need to know is to whom she was pandering to know who were the real "Deplorables" in her mind and theirs. (See screenshot below.)

Let me be clear. I'm not saying that a homosexual can't be a conservative. I've known many. What I'm saying is that openly declaring oneself homosexual instead of keeping one's sexual issues private is a Marxist tactic for forcing social change, and whoever does that from inside the conservative movement is a Trojan Horse – an espionage agent – carrying the progressive agenda behind enemy lines even if they don't intend to be. The mainstreaming of sexual sub-cultures is NOT "progress" to anyone but "progressives."

Richard Grenell is a Trojan Horse. President Trump should not trust him and neither should we Deplorables.

If you want more information on how to understand and respond to this issue I have two free books available in PDF upon request by email. "Redeeming the Rainbow" addresses the LGBT agenda from a largely secular perspective. "The Petros Prophecy" explains and debunks "gay theology" from an unapologetic Biblical perspective. 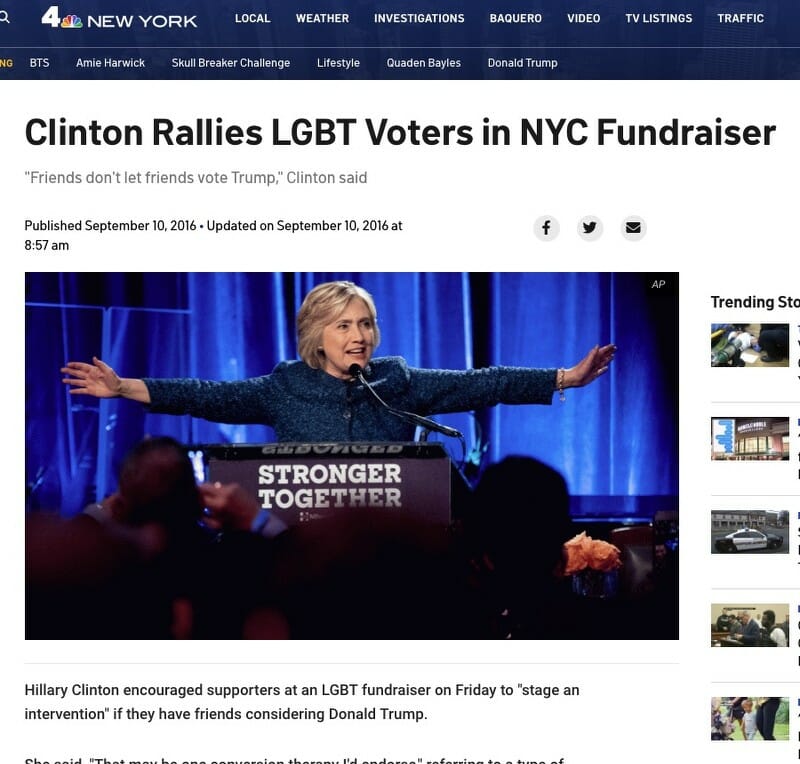