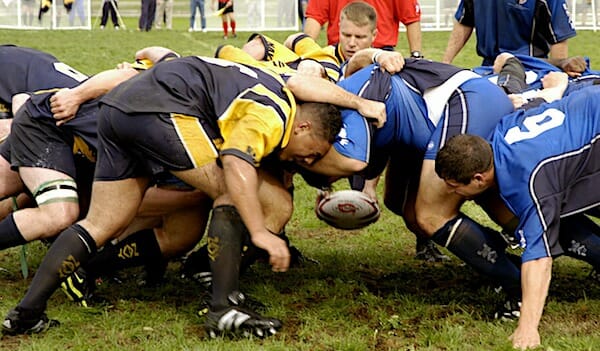 Australia's professional rugby union has been accused of ordering players to be quiet about the firing of a player for quoting the Bible in an Instragram post.

The player, Israel Folau, challenged the decision and later got both an apology and a settlement.

The Australian Associated Press reported senior international players Sekope Kepu and Samu Kerevi submitted statements in support of Folau to the Federal Circuit Court of Australia in November. But the players said they were barred from speaking to the media about the case by Rugby Australia.

Kerevi said Folau was punished for "expressing his faith," contending the discipline was inconsistent with union practices.

"At the time I wanted to support Israel publicly. I couldn't because the players were told by management not to comment on the issue," Kerevi said.

The BBC reported Folau, a former Wallabies star, sought more than $7 million and a return to his team, but the terms of the settlement were not disclosed.

Folau charged that his termination was a case of religious discrimination.

In a joint statement, the two sides said they had not intended harm or to offend people.

The 30-year-old wrote on Instagram that hell awaits "drunks, homosexuals, adulterers, liars" and others and called on them to repent.

Rugby Australia deemed the Bible-based statement a "high-level breach" of its code of conduct.

The case erupted into a national furor over free speech and discrimination, and observers said a court verdict "could have set a legal precedent for religious expression in Australian workplaces."

DailyMail.com reported Kerevi and Kepu wrote to the court in support of Folau.

They felt they were muzzled by the union, the report said.

"My perception was that the media was briefed to approach people who would toe the 'anti-Israel' line and were discouraged from approaching potential Israel supporters (including Christian players)," Kepu explained.

DailyMail.com reported Kepu "even claimed he was pulled from a NSW Waratahs media session over fears he might publicly express his views in support of Folau – a claim which has been denied by the Waratahs."