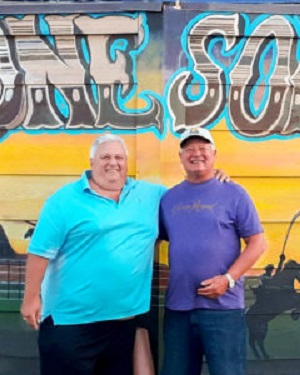 That's after the city hastily enacted a free speech-friendly ordinance to replace one that censored murals.

Officials with the Institute for Justice said a lawsuit filed against the city by the owners of Lonesome Dove saloon has ended after the city changed its regulations to allow the saloon's mural.

Brian Berube and August Kersten, the saloon's owners, and IJ had sued the city for "trying to ban their mural because it was 'intended to advertise an establishment,'" the IJ reported.

"Not only did their lawsuit save Lonesome Dove's mural, it led Mandan to enact a new ordinance that lets residents and businesses put up their own murals throughout town."

"Today's victory is a win for not just Lonesome Dove, but the First Amendment and the people of Mandan," said IJ Senior Attorney Robert Frommer. "Everyone now can speak a bit more freely due to Brian and Augie fighting for their free speech rights. And cities in North Dakota and across the country should take heed: if you discriminate against commercial messages like Brian and Augie's mural, you too might find yourself in court."

"We hope everyone can enjoy putting murals without having to go through what we went through," said Kersten, in a statement released by the lawyers.

It was in 2018, 27 years after Augie and Brian started Lonesome Dove, that they hired an artist to paint a sun setting over the mountains, with a ranch and cowboys scattered across the landscape.

The artist painted the words "Lonesome Dove" across the top. Everybody seemed to like it, until city officials gave the owners a citation for not previously getting a mural permit. And when they applied, they were told that there was no permit for them.

Mandan previously had determined that "no mural shall convey a commercial message," and that caused the trouble, IJ reported.

The owners saw results almost as soon as the lawsuit was filed.

"Two days after launching their lawsuit in May 2019, a federal court ordered that Mandan not issue thousands of dollars in fines against Lonesome Dove for keeping up its mural. In that order, U.S. District Court Judge Daniel Hovland said, 'Such a content-based restriction on speech as Mandan has enacted is unlikely to survive constitutional muster.'"

The city then worked to adopt a new ordinance.

The saloon owners had wanted the mural in order to cover up an old beer-company logo.

It was a waitress who was commissioned by the saloon owners to paint a sun setting over the mountains, with a ranch and cowboys scattered across the landscape. Artistically rendered across the top of the mural are the words "Lonesome Dove."