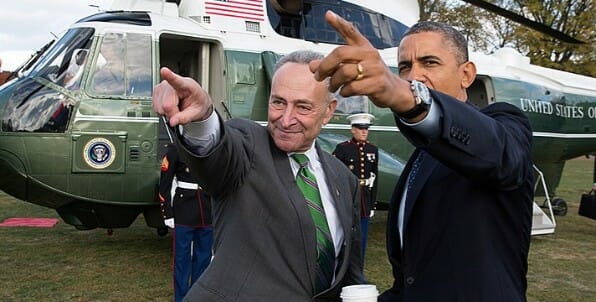 But the New York senator came out of the gates Monday with a letter to 74 inspector generals asking for "immediate action to investigate any and all instances of retaliation" against whistleblowers, the Hill reported

It cited Trump's "retaliation" against Lt. Col. Alexander Vindman following the National Security Council staffer's testimony in Trump's impeachment trial. Vindman and his twin brother, Lt. Col. Yevgeny Vindman, were escorted from the White House Friday. They are returning to the Pentagon after their White House service.

Schumer was responding to a reporters question Wednesday when he insisted there was "conclusive" evidence against the president, USA Features Media reported.

"And if the president does it in three months, they should impeach him again," he said.

The minority leader was asked if the Senate was ready to "put impeachment to bed."

"Look, this idea, we have too many impeachments, too few impeachments; the standard should not be how many or what's politically right or wrong," Schumer replied.

As a congressman in 1998, Schumer was opposed to the impeachment of Democratic President Bill Clinton.

"The standard should be, did the president commit high crimes and misdemeanors? I think it's conclusive that the president did," he said of Trump.

'Revenge' or 'draining the swamp'?

Trump explained in a tweet on Saturday that Lt. Col. Alexander Vindman was "very insubordinate" and was "given a horrendous report by his superior."

On Friday, the Vindman brothers were escorted from the White House hours before the U.S. ambassador to the EU, Gordon Sondland, announced the president intended to recall him. Both testified in the House impeachment investigation.

Schumer wrote in his letter Monday, "These attacks are part of a dangerous, growing pattern of retaliation against those who report wrongdoing only to find themselves targeted by the President and subject to his wrath and vindictiveness."

However, with the news Monday that Trump and National Security Adviser Robert O'Brien have cut 70 positions inherited from former President Barack Obama, the Vindmans' exit looks more like another fulfillment of Trump's campaign promise to "drain the swamp."

Many of the 70 were loaners from other agencies to came to NSC when Obama fattened the staff to 200," the Washington Examiner reported. The loaners have been sent back, and others have left government work.

The anonymous "whistleblower" complaint that triggered the Democrats' failed impeachment drive is believed to have come from the NSC, which is part of the president's personal staff.