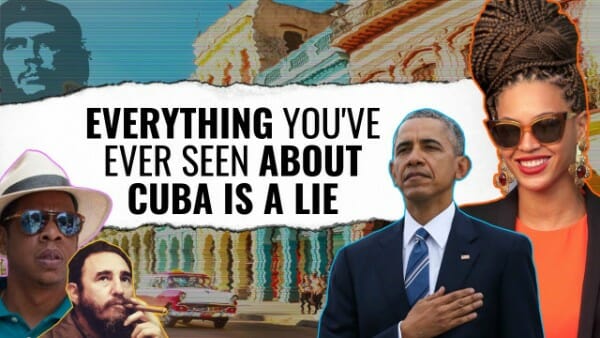 Hours-long waits for gas and food, crumbling buildings and oppressive government surveillance marked the experience of four Americans who captured their trip to communist Cuba on video.

The members of the student activist group Turning Point USA aim to show Americans what some 60 years of socialism has done for a once-thriving country, reported the Daily Caller.

"Everything you've ever seen about Cuba is a lie," TPUSA's Benny Johnson tells viewers in a video published Monday.

The activists noted that images of Cuba on the internet and in media reports typically do not portray the harsh reality.

“Look around you. The effects of socialism are everywhere — crumbling infrastructure and disgusting living conditions," Johnson says.

“That is what socialism has brought to Cuba. Maybe the socialists in America should take a short trip, a short 90 mile trip, and come here and say they want this in America."

When they arrived at the airport, authorities took TPUSA producer Colton Duncan's passport for seven hours.

"When we left the airport after seven hours, I think we thought the worst is behind us," Duncan said. "We could not have been more wrong."

They drove through decrepit parts of a formerly glamorous city, showing streets looking and smelling like "overflowing dumpster of rotting trash," as Johnson described.

The morning before they planned to leave Cuba, the TPUSA activists were awakened by armed officers banging on their door and demanding they turn over their possessions.

“I got on the phone with the embassy,” Johnson said. “And the guy says, ‘Get out of here now.'”

They left a day early.

"Even more so heartbreaking is that there are Americans here that would have that governance brought here," he added.

Are supporters of Bernie Sander's presidential bid among them?

Many argue the self-declared democratic socialist's vision is the Scandinavian nations, which, in fact, have free enterprise systems along with increasingly unsustainable welfare systems and high taxes.

Sanders has been clear about his support of such policies as universal health care and free college tuition. But CNN found last spring that when he first ran for the Senate in the 1970s, he advocated full-blown socialist policies such as nationalizing major industries, including energy companies, factories and banks.

And he campaigned for a 100 percent income tax for the wealthiest Americans.

Sanders had a strong showing in the Iowa caucuses, where, according partial results released Tuesday night, he led all candidates.

In February 2019, CNN's Wolf Blitzer asked Sanders whether he wanted America to become a socialist nation

In a town-hall-style interview, Blitzer recalled President Trump's declaration in his State of the Union address earlier this month.

Blitzer asked: "Senator, President Trump said in a State of the Union address, and I am quoting him now, this is the president, 'America will never be a socialist country.' Will that hold true if you're elected president?"

Sanders replied: "If I am elected president, we will have a nation in which all people have health care as a right. Whether Trump likes it or not. We are going to make public colleges and universities tuition free. We are going to raise the minimum wage to a living wage of at least 15 bucks an hour, and whether Trump likes it or not, when I talk about human rights, you know what that also means, it means that our kids and grandchildren have the human right to grow up in a planet that is healthy and habitable. And it is really a disgrace and an embarrassment that we have a president who rejects science, who does not even understand that climate change is real and caused by human activity, who does not understand what this planet will look like in years to come if we do not go forward boldly and transform our energy system away from fossil fuels."

Over the past two weeks, Project Veritas has released undercover video exposing the radical views of paid Sanders campaign organizers. One staffer admitted the campaign attracts anarchists, Marxists and other "truly radical people." He echoed other staffers highlighted by Project Veritas in his call for a "militant" peoples' movement to "strip power" from capitalists.

"I think he's a legit socialist masquerading as a democratic socialist," the staffer said.