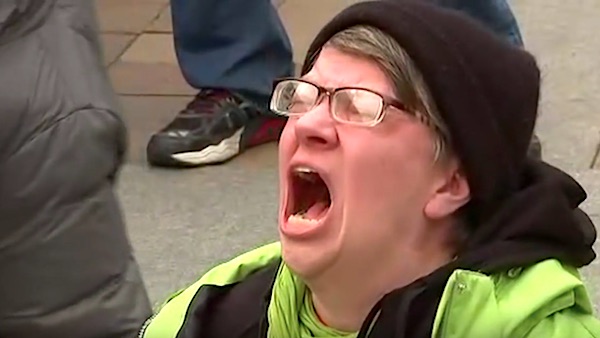 Woman screams "No!" as Donald Trump is sworn in as president. (YouTube video screenshot)

The new survey of over 8,000 people, conducted by science blog Slate Star Codex, found that those embracing leftwing political beliefs are more likely to have been diagnosed with a mental illness.

The results, reports Summit News, reveal that the farther left people are, the more likely they are to have been “formally diagnosed with depression, borderline personality disorder, bipolar disorder, or schizophrenia.”

“In addition, the results show that the highest percentage of respondents (38%) who admit being diagnosed with forms of mental illness also identify politically as Marxists,” said the report. “In comparison, just 12.1% of conservatives say they have been diagnosed with a mental disorder.”

These findings confirm those of previous studies.

In an extensive series of surveys involving more than 4,000 interviews conducted over the course of four years, Gallup pollsters in 2007 reported that Republicans had "significantly" better mental health than Democrats, with Independents ranking in-between the two parties.

"One could be quick to assume," said Gallup's analysis, "that these differences [in mental health] are based on the underlying demographic and socioeconomic patterns related to party identification in America today," noting that "men, those with higher incomes, those with higher education levels, and whites are more likely than others to report excellent mental health. Some of these patterns describe characteristics of Republicans, of course." However, Gallup revealed, “an analysis of the relationship between party identification and self-reported excellent mental health within various categories of age, gender, church attendance, income, education, and other variables shows that the basic pattern persists regardless of these characteristics. In other words, party identification appears to have an independent effect on mental health even when each of these is controlled for.”

Does being a Democrat – or a Republican – mean you’re more prone to depression, anxiety, or other mental ailments? To find out, BuzzFeed partnered with SurveyMonkey to ask Americans about their political affiliation and whether or not they’d ever been diagnosed with any of 12 mental health conditions and learning disabilities. SurveyMonkey Audience conducted the online survey exclusively for BuzzFeed, gathering a randomly selected, nationally representative sample of 1,117 people.