A Wisconsin teacher has been placed on leave for tweeting that Rush Limbaugh "should have to suffer" and die a "painful" death after the conservative radio host announced he has been diagnosed with advanced-stage lung cancer.

"Limbaugh absolutely should have to suffer from cancer. it's awesome that he's dying, and hopefully it is as quick as it is painful,” Travis Sarandos, an English teacher at the Milwaukee High School of the Arts, said in a since-deleted tweet Feb. 3, according to the Milwaukee Journal Sentinel.

He posted the tweet in response to Charlotte Clymer, an LGBT activist who said that she hoped Limbaugh would recover quickly and start advocating for affordable health care.

MPS says it has suspended one of its teachers Travis Sarandos for this tweet after Rush Limbaugh announced his cancer diagnosis pic.twitter.com/fLxU8il75T

Milwaukee radio host Mark Belling shared Sarandos' tweet on his blog Feb. 4, along with several other provocative tweets posted by the teacher.

According to Belling, Sarandos tweeted that he "hates" the Catholic Church and that he thinks the only hope for the future is a "mass extinction" of Christian conservative voters. He suggested this could be accomplished by poisoning "the communion wine." 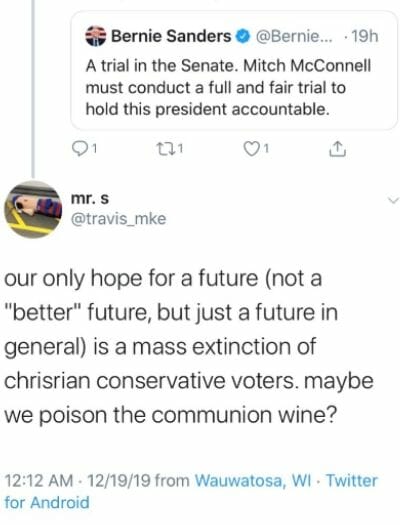 Milwaukee Public Schools said in an email to the Journal Sentinel that it knew about the tweet and that Sarandos was not representative of the students, staff or district. The district confirmed that Sarandos was placed on leave hours later and was under investigation.

Sarandos was not the only one who voiced disdain toward Limbaugh and his work in spite of the tragic news.

Reza Aslan, an author and CNN personality, posted a tweet asking people to question whether they believe the world would be better or worse without Limbaugh.

"Almost every minute of Rush’s adult life has been spent purposely making the world worse," Aslan wrote in another tweet. "He’s a racist, sexist, greedy, hateful man who has sown fear and violence with every dollar he’s made. There is absolutely no question whatsoever that the world is better without him in it."

Almost every minute of Rush’s adult life has been spent purposely making the world worse. He’s a racist, sexist, greedy, hateful man who has sown fear and violence with every dollar he’s made. There is absolutely no question whatsoever that the world is better without him in it.

Despite the ugly words from some on the left, Limbaugh was met with a wave of praise and appreciation from his supporters in light of his cancer announcement.

Vice President Mike Pence voiced his admiration and concern for the radio host, saying, "Rush Limbaugh is a National Treasure who has made a difference on the airwaves of America for 30 years. Rush, Karen and I will be joining millions across this Country in praying for your swift recovery. God Bless You!"

Rush Limbaugh is a National Treasure who has made a difference on the airwaves of America for 30 years. Rush, Karen and I will be joining millions across this Country in praying for your swift recovery. God Bless You!

During the State of the Union address, which took place the night after Limbaugh's announcement, President Donald Trump awarded him the Presidential Medal of Freedom, the highest civilian honor in the nation.

Limbaugh returned to the airwaves on Feb. 7 after missing three shows due to treatments. He said his supporters have made him feel like "one of the luckiest people alive."

Report: Joe Biden was involved in Chinese deal and was expecting 10% cut