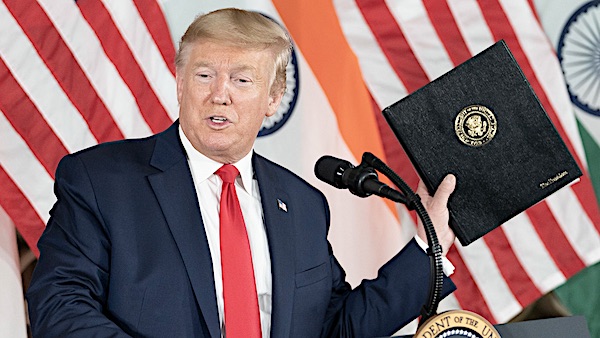 President Trump's campaign has filed a libel lawsuit against news outlet he often has described as "fake news," the New York Times, for "falsely" reporting that the campaign was colluding with Vladimir Putin.

"Today the president's re-election campaign filed suit against the New York Times for falsely stating the campaign had an 'overarching deal' with 'Vladimir Putin's oligarchy' to 'help the campaign against Hillary Clinton' in exchange for 'a new pro-Russian foreign policy, starting with relief from ... economic sanctions," the campaign announced.

The statement, from Jenna Elis, senior legal adviser to the campaign, said: "The statements were and are 100 percent false and defamatory. The complaint alleges The Times was aware of the falsity at the time it published them, but did so for the intentional purpose of hurting the campaign, while misleading its own readers in the process."

The filing said the newspaper pursued its "false" reporting because of "extreme bias against and animosity toward the campaign, and the Times' exuberance to improperly influence the presidential election in November 2020."

The Times also is accused of "a systematic pattern of bias against the campaign, designed to maliciously interfere with and damage its reputation and seek to cause the organization to fail."

The article claimed: "There was no need for detailed electoral collusion between the Trump campaign and Vladimir Putin's oligarchy because they had an overarching deal: the quid of help in the campaign against Hillary Clint for the quo of a new pro-Russian foreign policy, starting with relief from the Obama administration's burdensome economic sanctions."

However, it contains no "proof of its claims of a 'quid pro quo' or 'deal' between the campaign and Russia."

Instead, it simply cites already-known contacts between a Russian lawyer and some people connected with the campaign, and "insinuates" they "must have resulted" in a deal.

The "falsity," however, came because the newspaper – and others – already had reported that the contacts "did not result in any quid pro quo."

Special counsel Robert Mueller confirmed the falsity of the story, the complaint pointed out, concluded there was no collusion.

And the writer "described himself in an interview as 'a Democrat with a vengeance.'"

The complaint claimed the Times displayed a "reckless disregard for the truth" and knew the statements were false "at the time of publication."