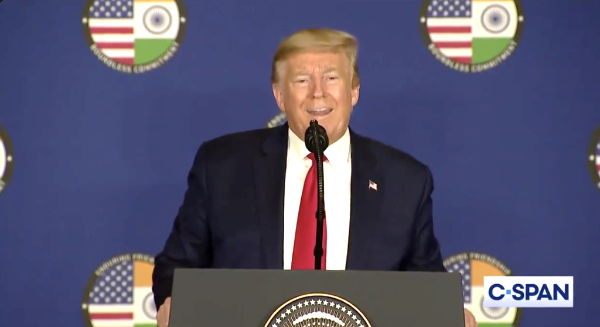 In yet another contentious exchange, President Trump told CNN White House correspondent Jim Acosta during a press conference in India on Tuesday he should be "ashamed" about his network's coverage.

Acosta asked Trump if he would pledge not to accept foreign interference in the election and to explain why he replaced Joseph Maguire as acting director of national intelligence.

"If you see what CNN, your wonderful network said, I guess they apologized in a way. Didn’t they apologize for the fact that they said certain things that weren’t true? Tell me, what was their apology yesterday? What did they say?"

Acosta retorted, "Mr. President, I think our record on delivering the truth is a lot better than yours sometimes.”

Trump fired back: "Your record is so bad that you ought to be ashamed of yourself. You have probably the worst record in the history of broadcasting.

"Your record is so bad," the president continued, "that you ought to be ashamed of yourself. You have probably the worst record in the history of broadcasting."

See the exchange with Acosta:

Regarding Maquire, Trump explained that his time as acting director was to end March 11.

Acosta briefly was banned from the White House in 2018 after a contentious exchange with Trump during a press conference in which refused to hand over the microphone to a female White House aide.

His press pass was restored after CNN argued the White House violated the First and Fifth Amendment rights of the reporter and his network.