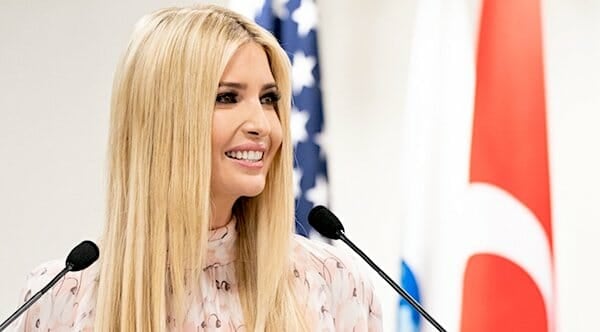 Forget about the 2020 election, which Donald Trump will win by a landslide. Think ahead to 2024 when our politics will be more peaceful, bipartisan, effective and sane, and the angry and hateful Democratic socialists and commie wannabes will be consigned to their proper place in the dustbin of history. America will be America once again, and, of course, it will be great!

The president following Trump must be one of talent and exceptional character who will continue and expand the Make America the Greatest Ever program. At all costs, we must never lapse back to the political correctness, identity madness, vague globalism, climate silliness and vicious tribalism of the current Democratic Party.

If Ivanka Trump succeeded Donald Trump as president in 2025, she would not only be the long-awaited "first woman" chief executive but also one of the most personable, elegant and best-prepared persons ever for the office. Indeed, she will have had eight years of firsthand experience within the intrigue and drama of her father's gut-wrenching "war of the worlds" presidency.

Prior to the 2016 election, Sen. Bob Corker of Tennessee commented on MSNBC that Ivanka Trump would make a great running mate on her father's ticket. Moreover, "I don't know that I've met a more composed, brilliant, beautiful-in-every-way person." On "Fox and Friends" the next day her brother Eric agreed: "She's got the beautiful looks, she's smart – she's smart, smart, smart" (see Elite Daily).

Even Ivanka's detractors are forced to agree that she is both beautiful and smart. But she is also highly experienced in business, politics, national and international affairs, and she has been her father's best supporter in his first term.

In August 2015, Trump stated that Ivanka had helped shape and elaborate his views on women and that she had become his leading adviser on women's issues. After two months on the job in the new Trump administration, she was appointed "First Daughter and Senior Adviser to the President." Clearly, Trump cherishes and loves her deeply, and she is the go-to person for advice and support in his roiling world of leftist enemies, naysayers and investigating committees.

Among other things, any new woman president must be a lady in the most rigorous and classical sense. Unfortunately, the conservative, traditional and refined lady of yesteryear is an anachronism and object of scorn today. America is not only post-Christian and dipping more deeply into paganism every day, it discourages the necessary transition from girl to lady at every turn. Think back on the recent halftime show at the Super Bowl!

Poise, civility, generosity, skilled management of home and family, and a refined sense of social presence define the true lady. People flock to her, they value her company and cannot help but envy her. For me, the duchess of Cambridge, Kate Middleton, epitomizes the concept of lady in terms of beauty, motherhood, virtue and social presence.

Just how special is Ivanka Trump anyway? Let me suggest a method of analysis. As a professor of clinical psychology in my working days, I constructed tests, used them and tried to reduce human behavior to meaningful numbers when possible.

I recommend constructing a simple 1-8 point scale where any measured or assumed difference can be rated. For example, I constructed a Savage to Saint Christian Morality Scale that provides a way of theoretically rating differing moral aspects of American society.

On this scale, I would give the halftime show previously mentioned a 2.5 at best – that is, about halfway between barbarian level (2) and the pagan level (3). I suspect the level of savagery (1) is not far behind (e.g., explicit public sexual performances). Certainly, there were no expressions of Christianity (levels 4, 5, 6 and 7) or saintliness (level 8) to be seen anywhere in the show.

I discussed this scale in a fundamentalist church a while back, and the group rated where they thought the moral level of America was around 1950 versus the current time (four years ago). I was shocked that their ratings were very similar to mine – our ratings hovered around level 6 (the believing Christian) for 1950 and around level 4 (post-pagan Christian) for the present. I suspect our country has dropped even lower toward paganism in the past four years.

Now let's develop a simple 8-point rating scale for assessing current candidates running for president. "Eminently Qualified to be President of the United States" is assigned to level 8, and "Totally Unqualified to be President of the United States" assigned to level 1. I believe the resulting numerical ratings will be more accurate and meaningful than just making vague evaluative judgments about candidates. In essence, we are rating the "total package" level 8 versus "none of the package" level 1, or somewhere in between.

On this scale, I would give Ivanka Trump a 5.75 today on the 8-point Eminently Qualified scale, and I would predict a rating over 6 following experience gained during her father's second term. Thus, I predict that she will be hovering near to "eminently qualified" to run in 2024. She is truly a "total package," and that is a rarity in our increasingly self-indulgent and decadent culture.

How would the current candidates of the Democratic Party fare on this scale? In my view, those now challenging Donald Trump are so weak as a group that rating them is a waste of time. I see none of them even approaching "Eminently Qualified to be President," and the best of the lot, in my view, cannot even score above the mid-point of 4 on the 8-point scale. We have to ask, is this the best America has to offer?

Kooky political Independent and "democratic socialist" Bernie Sanders now leads this merry band of miscreants on its path of self-destruction, splintering and neutralization of the traditional Democratic Party. Party loyalists like James Carville and Chris Matthews are nigh-hysterical regarding Bernie as the party standard bearer, and MSNBC is in full meltdown. For them, the sky is falling, and the end is near for their time in the sun. They would give commie Bernie a measly 1 on our scale – that is, "Eminently Disqualifed!"

Ivanka Trump is, at this moment, more qualified to be president than any of those currently running against her father, Donald J. Trump. By the end of her father's second term, she will be even more qualified – good news indeed for those hoping to make America even greater.

Kent G. Bailey
Kent G. Bailey, Ph.D., is a retired professor of clinical psychology who specializes in Human Paleopsychology and the paleopolitics of human behavior.
Here's the Trump who will take over the White House in 2025
How Trump has inspired others to be 'warriors extraordinaire'
Arnold's apology signals masculinity's extinction
Marxist masses arise: 'Tsar' Trump must die!
The New York Republic and its Marxist values
See more...