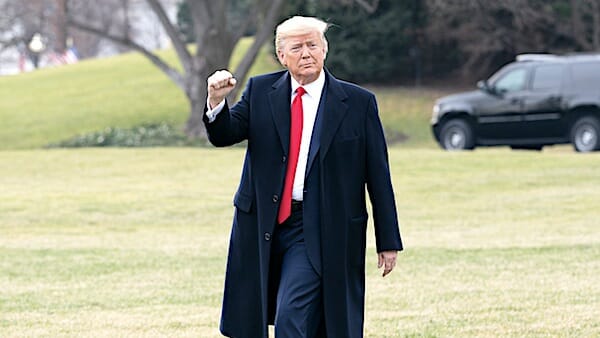 As he prepares to deliver the State of the Union address Tuesday on the eve of expected acquittal in the Senate, President Trump's approval rating is at 49% in a new Gallup poll, his highest in that poll since he took office.

His previous high, according to Gallup's poll of Americans, was 46%, which he reached in May after former special counsel Robert Mueller's investigation concluded his campaign did not collude with Russia to win the 2016 election.

Rasmussen's daily tracking poll -- which surveys likely voters rather than simply Americans -- has Trump at 48% approval on Tuesday.

The Gallup poll reflected a surge in support from Republicans. Gallup found 94% of Republicans approve of his performance, compared to 88% in early January.

Trump's approval among independents also rose, with 42% approving of his performance, up from 37% in early January.

Meanwhile, only 7% Democrats approve of his job performance, down from 10% in early January.

The survey was conducted from Jan. 16-29, during the Senate impeachment trial, which is expected to end Wednesday with Trump's acquittal. Gallup found 52% of Americans favor acquitting Trump, and 46% favor removing him from office.

Gallup asked Americans their view of some of Trump's most recent accomplishments, which he will highlight in his State of the Union address Tuesday night, beginning at 9 p.m. Eastern Time.

Americans gave positive marks to Trump's order that killed Iranian terror-chief Qassem Soleimani and the trade deals with China, and with Mexico and Canada.

'Low key' State of the Union

Trump said Tuesday at a lunch ahead of his third State of the Union address that his remarks will be "extraordinarily low key."

He told reporters Tuesday, however, that he can't rule out it arising in some manner.

"As he likes to say, we'll see what happens," Gidley said.

White House officials say the theme of the speech is the "Great American Comeback," focusing on the "blue collar boom," lowering health costs and reforming immigration.

Michigan Gov. Gretchen Whitmer will deliver one of two Democratic Party responses. The other, in Spanish, will be delivered by Democratic Rep. Veronica Escobar of Texas.

Trump will tout a strong economy bolstered by the fulfillment of his campaign promise to replace the 25-year-old North American Free Trade Agreement.

Under the new trade bill, the USMCA, more cars will be produced in the United States, and Mexico will be required to change laws that will improve worker conditions and wages, reducing the incentive for U.S. companies to relocate there.

After a risky 18 months of negotiation, the China trade deal has the communist nation buying an extra $200 billion worth of U.S. manufacturing, energy and farm exports this year and next.

Trump will also spotlight record-low unemployment figures, including for blacks and women, and the addition of 7 million jobs since he took office.

Along with the death of Soleimani, Trump ordered the raid that led to the death of ISIS leader Abu Bakr al-Baghdadi.
Trump had called Baghdadi's capture or death "the top national security priority of my administration."

Trump also has had 187 federal judges and two Supreme Court Justices confirmed. Of particular note is the change in the notoriously left-leaning 9th Circuit, with 10 of its 29 active seats now held by Trump appointees. Nearly half of the court's judges have been appointed by Republican presidents.

On the immigration front, the U.S. Supreme Court upheld the Trump administration's "public charge" immigration restriction. It allows the denial of visas to immigrants who are likely to become a financial burden to the state rather than a productive member of society.

Only about 100 miles of Trump's promised wall on the southern border had been built. But the administration has promised 450 miles of new wall will be completed by the end of this year.