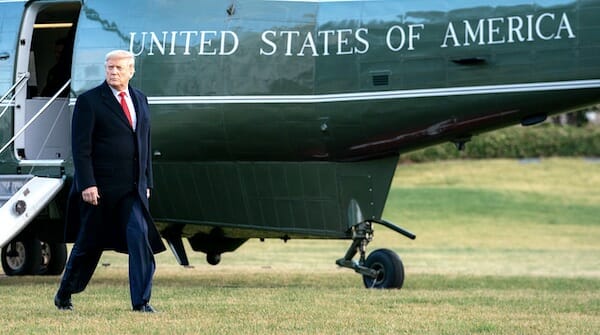 President Donald J. Trump disembarks Marine One Friday, Feb. 7, 2020, and walks back to the Oval Office upon his return from his trip to Charlotte, N.C. (Official White House photo by Tia Dufour)

There's been much fighting in Washington since President Trump took office over how to prevent terrorists from entering the U.S.

Trump issued an executive order barring the entry of people from certain terror-fomenting nations that eventually was upheld by the Supreme Court amid fierce opposition.

But what about those already here who pose a threat?

Fox News reported the administration has established a new section of the Justice Department that will strip citizenship from people who "fraudulently" became American citizens.

The law always has banished anyone who participates in terror or war crimes.

But the new office inside the DOJ's Office of Immigration Litigation will pursue the denaturalization of "those who had failed to disclose they had been involved in criminal activity" when they applied for citizenship.

"When a terrorist or sex offender becomes a U.S. citizen under false pretenses, it is an affront to our system – and it is especially offensive to those who fall victim to these criminals," said Jody Hunt, a DOJ official.

"The new Denaturalization Section will further the department's efforts to pursue those who unlawfully obtained citizenship status and ensure that they are held accountable for their fraudulent conduct."

Recent cases have involved a person convicted of terrorism in Egypt, another who was trained in an Afghan jihadist camp and coordinated with Osama Bin Laden, and another who was convicted in Bosnia of executing civilians.

The focus is on crimes committed before and concealed during the citizenship process. Citizens cannot be deported, but those who have been stripped of citizenship can be.