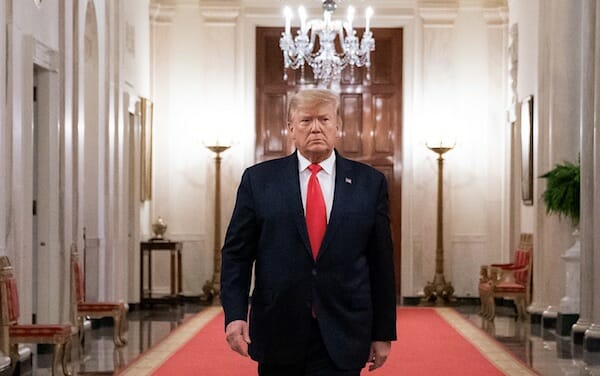 In only the third vote of its kind in American history, the Senate acquitted President Trump Wednesday on two articles of impeachment.

The vote on abuse of power was 52-48, with Sen. Mitt Romney of Utah the only Republican to vote to remove Trump. Romney explained hours before the final vote he believed that Trump had engaged in as "destructive an attack on the oath of office and our Constitution as I can imagine."

However, he voted not guilty on obstruction of Congress, making it a 53-47 vote on strict partisan lines. A supermajority of 67 votes is required to remove a president from office.

Sen. Susan Collins, R-Maine, announced Tuesday she would vote against both articles of impeachment, saying the second Senate trial of a sitting president in  21 years "reflects the increasingly acrimonious partisanship facing our nation."

But he warned that "this episode is a symptom of something much deeper," noting Democrats have never accepted the outcome of the 2016 election.

He said he hoped to look back on this day as "the day the fever began to break."

"I hope we will not say this was just the beginning," the Kentucky Republican said. 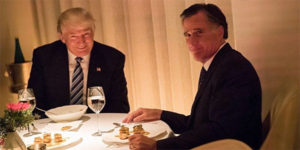 Romney, explaining his vote earlier Wednesday on the Senate floor, said President Trump is "guilty of an appalling abuse of public trust."

"What he did was not perfect," he said, countering Trump's description of the July 25 phone call with Ukraine President Volodymyr Zelensky that was at the heart of the impeachment articles. "No, it was a flagrant assault on our electoral rights, our national security and our fundamental values."

Romney was a fierce critic of Trump during the Republican presidential primary, calling him a "phony." But he praised Trump after the November 2016 election for a "message of inclusion and bringing people together," and the former Massachusetts governor was at one time on Trump's short list for secretary of state. However, Romney has been a Trump adversary in the Senate, confirming he was behind the anonymous "Pierre Delecto" Twitter account critical of the president's tweets.

On the Senate floor, McConnell chastised House Speaker Nancy Pelosi for insisting that regardless of the outcome, Trump would be "impeached forever."

"The speaker of the House refused to accept this acquittal," he said. "Perhaps she will tear up the verdict like she tore up the State of the Union address."

Senate Minority Leader Sen. Chuck Schumer, D-N.Y., said Friday that Trump's "acquittal will be meaningless, because it will be the result of a sham trial."

But McCarthy insisted Democrats have abused their power by obsessing on Trump rather than doing the people's business.

"I hope the Democrats will finally end their desire to impeach this president," McCarthy said. "I know it's been what they craved the majority for and what they wasted their majority on."

He said the House will seek to subpoena former National Security Adviser John Bolton to testify about what he knew about Trump's desire for an investigation of former Vice President Joe Biden.

"We always knew [Trump] was going to be acquitted by the Senate," said Nadler, the chairman of the House Judiciary Committee. "Because we always knew that the Republicans didn't care about the evidence or anything else. They proved it by not being willing to see the witnesses."

Nadler said investigations are still underway regarding a variety of other issues as well, including Robert Mueller's special counsel report, which concluded the Democrats lacked evidence to support their claim that Trump colluded with Russia to win the 2016 election.

House Judiciary Committee member Rep. Jamie Raskin, D-Md., said the House has a "constitutional oversight responsibility to make sure that there is no criminality and corruption taking place in the executive branch."

"So, we should not let up for one second," he said.

Meanwhile, Republicans plan to continue investigations of their own into matters related to the Democrats' impeachment charges.

The impeachment was triggered by the complaint of an anonymous "whistleblower" who, based on second-hand knowledge, charged Trump pressured Zelensky in the July 25 phone call to investigate Joe Biden, a potential political rival, and an issue related to the 2016 election by threatening to withhold U.S. aid.

Republicans have argued the aid was delivered by the deadline and Trump had a legitimate public interest in investigating possible corruption surrounding the Bidens. They point to significant evidence of a conflict interest in a corrupt Ukrainian firm's payment of $3 million to Hunter Biden his father, then Vice President Joe Biden, was in charge of the Obama administration's anti-corruption campaign in the country.

Senate Judiciary Committee Chairman Lindsey Graham, R-S.C., has called for an investigation of the Biden matter.

And Senate Homeland Security Committee Chairman Ron Johnson, R-Wis., said his committee will continue to investigate Ukraine's alleged intervention in the 2016 election along with the Obama FBI's investigation of the Trump campaign.