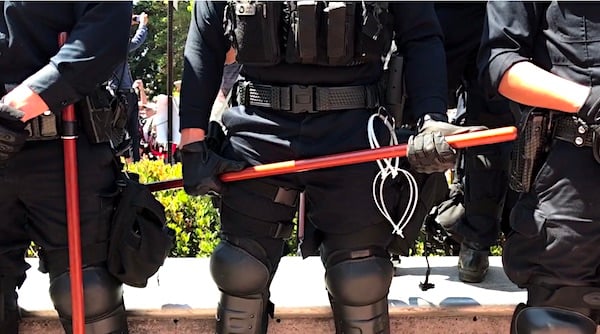 A team of legal experts from the Institute for Justice is asking the U.S. Supreme Court to leave alone a lower court's decision that could allow an innocent college student to hold accountable police officers for the beating they gave him.

It was the 6th U.S. Circuit Court of Appeals that decided in favor of James King in his fight with members of state-federal police task force.

They had "misidentified" him as a suspect in a petty theft, and the IJ has posed online a video explaining what happened.

In 2014, King, then a 21-year-old college student, was walking between his two summer jobs in Grand Rapids, Michigan when he came upon two men in t-shirts and jeans, leaning against a black SUV. Although James had no idea who they were, these men were a local police detective and an FBI agent working as part of a task force and looking for a fugitive wanted for stealing a box of empty cans and several bottles of liquor from his former boss’ apartment. Without identifying themselves as police, the men began asking James questions and ultimately pinned him against their vehicle. When one of the men took James’ wallet, James believed he was being mugged. But when he tried to escape, the men tackled James, choked him unconscious, and severely beat him. While he was being beaten, James screamed for help, and passersby—who also did not recognize the men as police—called 911 pleading for help for James.

The IJ said when uniformed officers arrived, police just added to the injury.

They shielded the attackers from accountability, charged him – even though they knew he was not the fugitive – and prosecuted him.

He was acquitted by a jury, and sued the officers.

The government has used that strategy to "ensure" those officers are not held accountable.

Authorities have argued that the officers are immune from prosecution.

IJ Attorney Patrick Jaicomo explained, "The Fourth Amendment prevents the government from undertaking unreasonable searches and seizures. Here, at every step of the way, the officers were unreasonable in searching and seizing James, including when they beat him. We filed this lawsuit in 2016. It’s now 2020 and the government still hasn’t even filed an answer addressing all the claims that we’ve raised. Instead, they’ve spent the past four years filing different motions with courts, arguing under technicalities why they shouldn’t be held accountable rather than explaining why what they did actually wasn’t wrong."

"James is asking to have the appeals court ruling corrected so he and others whose rights have been violated by state/federal task force members can hold officers accountable under both state and federal law," said IJ Senior Attorney Bob McNamara. “The government wants to maintain a system where it’s heads, they win, tails, you lose. That’s unfair and unlawful, and we are fighting to change it."

The original trial court dismissed the case but the 6th Circuit reversed.

"If an officer has both state and federal powers, he should be more—not less—accountable to the Constitution,” said IJ President & General Counsel Scott Bullock.